You may email me at wwawitcher @ windstream. net

Benjamin M. Witcher spent time in Camp Winder and Camp Chimborazo recovering from sickness and wounds received when he was fighting in the Civil War as a Confederate Soldier, and was specifically wounded at the "Seven Days Battle" in Virginia.
As a member of the the Georgia 35th Infantry, he could have been at the Battle of Gettysburg, as he was discharged due to war inflicted disabilities three weeks after that battle. Unfortunately, we may never know if he was actually at Gettysburg or in Camp Winder during that fateful battle.
However, we do know that the time Ben spent at Camp Winder Hospital was horrible enough to motivate him to go around his superiors and write the then Governor Brown of Georgia about the appalling conditions the common soldier endured while being treated at that hospital camp.
I have provided a transcript of the letter, and below that, the letter itself. When you read the actual letter, attention must be taken to place the four pages in proper order, as they are images of an unfolded packet. 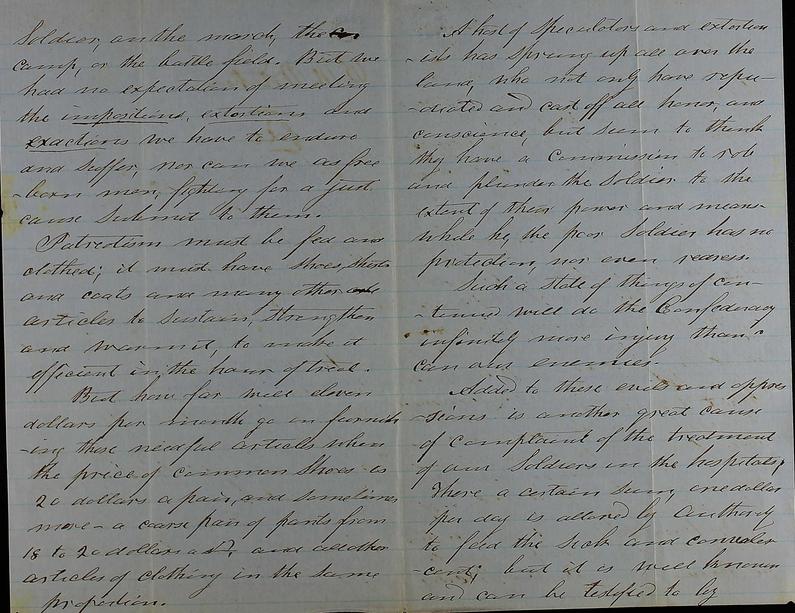 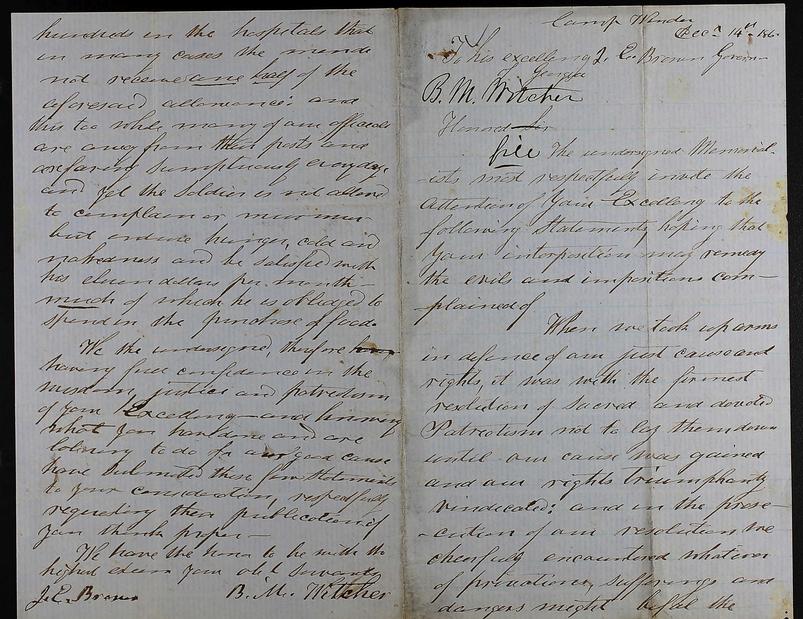 To His Excellency J. E. Brown, Governor of Georgia Honored Sir The undersigned memorialist most respectfully invite the attention of your Excellency to the following statements hoping that your interpositions may remedy the evils and impositions complained of.

​When we took up arms in defense of our just cause and rights, it was with the firmest resolution of sacred and devoted patriotism not to lay them down until our cause was gained and our rights triumphantly vindicated: and in the prosecution of our resolutions we cheerfully encountered whatever of provocations, sufferings, and dangers might befall the soldier, on the march, the camp, or the battlefield.  But we had no expectation of meeting the imposters, extortioners, and extractors we have to endure and suffer; nor can we as free born men, fighting for a just cause submit to them.

​Patriotism must be fed and clothed; it must have shoes, shirts and coats and many other articles to sustain, strengthen and warm it, to make it efficient in the hour of trial.

​But how far will eleven dollars per month go in furnishing these needful articles when the price of common shoes is 20 dollars a pair, and sometimes more – a coarse pair of pants from 18 to 20 dollars?  and all other articles of clothing in the same proportion.

A host of speculators and extortionist have sprung up all over the land, who not only have separated and cast off all honor, and conscience, but seem to think they have a commission to rob and plunder the soldier to the extent of their power and means while he, the poor solider has no protection, nor even redress.

​Such a state of things of continued will do the confederacy infinitely more injury than can our enemies.

​Added to these evils and oppositions is another great cause of complaint of the treatment of our soldiers in the hospitals; there a certain sum, one dollar per day is allowed by authority to feed the sick and convalescent; but it is well known and can be testified to by hundreds in the hospitals that in many cases the men do not receive one half of the aforesaid allowance: and this to while many of the officials are away from their posts and are faring sumptuously every day.  And yet the soldier is not allowed to complain or murmur but endure hunger, cold and nakedness and be satisfied with his eleven dollars per month – much of which he is obligated to spend in the purchase of food.

​We the undersigned, therefore having full confidence in the wisdom, justice and patriotism of your Excellency – and honoring what I have done and are laboring to do for our good cause, have submitted these firm statements to your consideration, respectfully regarding their publication if you think proper – we have the honor to be with the  highest Excellency.