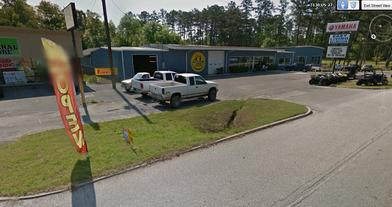 This is the Google Earth view of the 160 acres which Ben won in the 1832 lottery pick, just north of what is now Rome, Georgia. 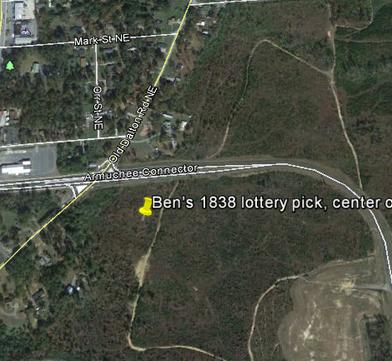 These are the current addresses in Ben's 1832 lottery pick. 160 acres are represented in this map cutout. This is located just north of Rome, Georgia. 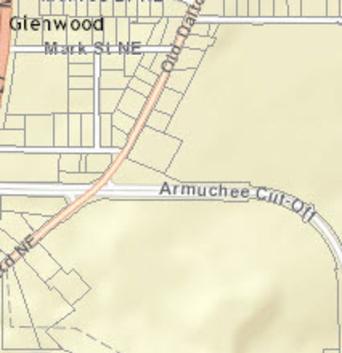 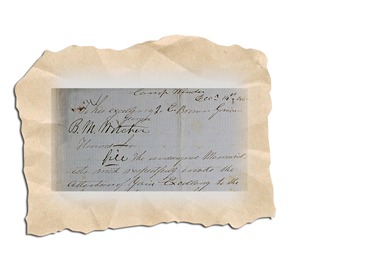 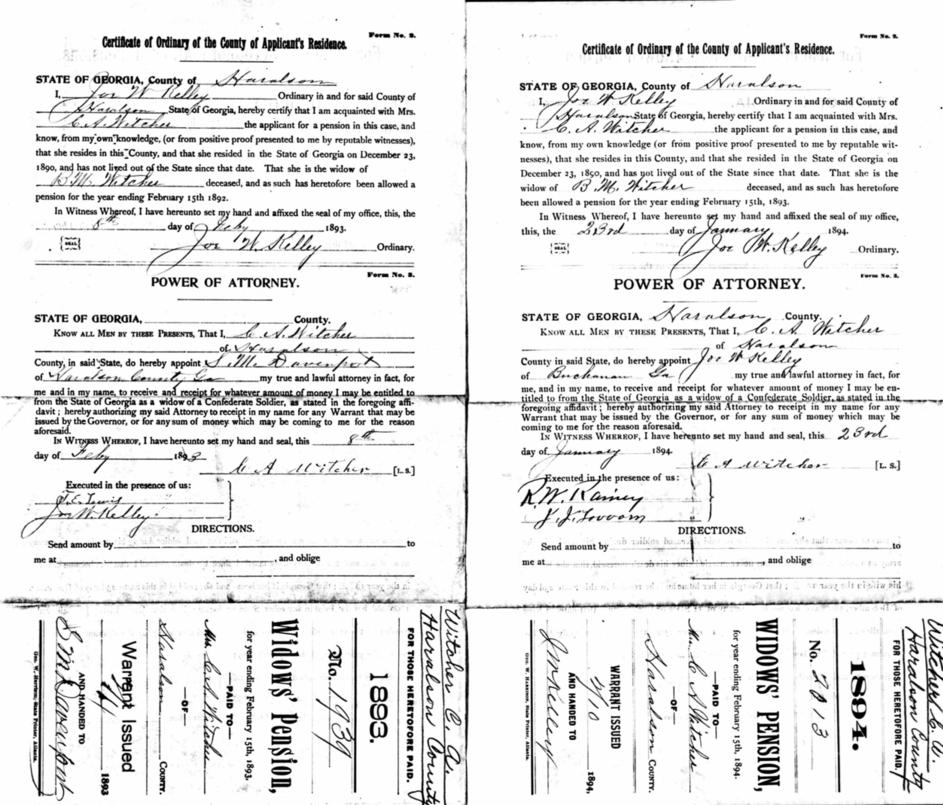 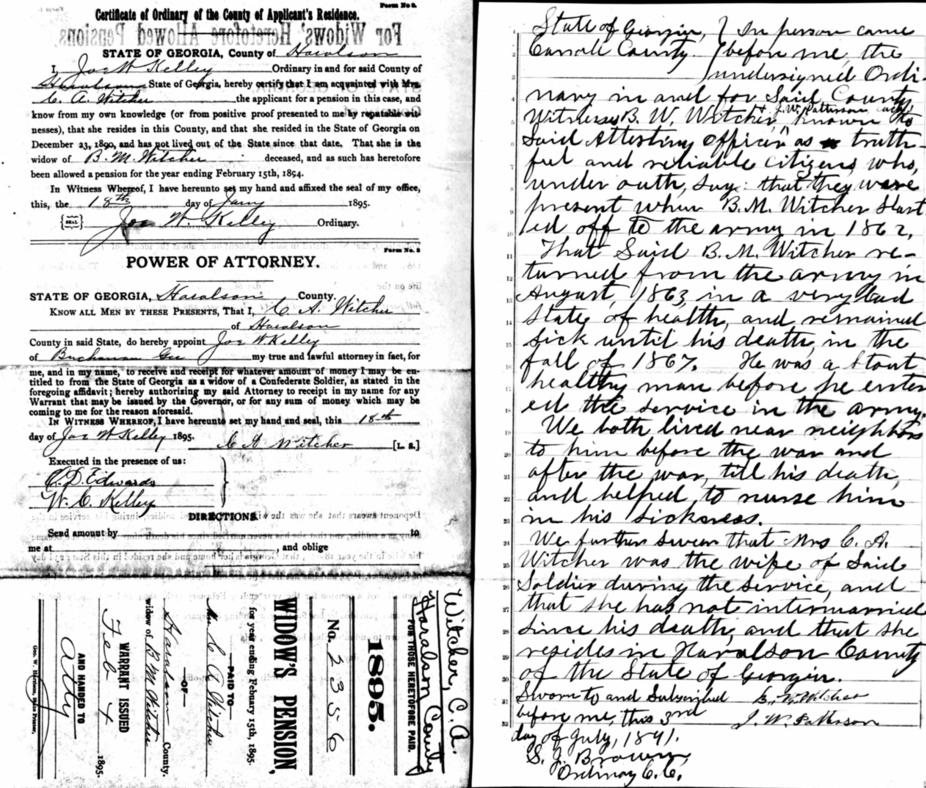 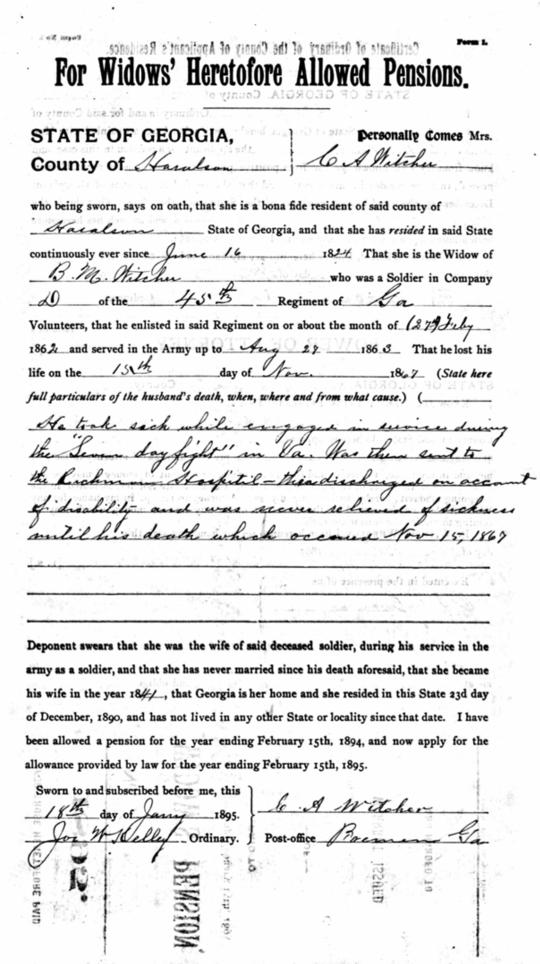 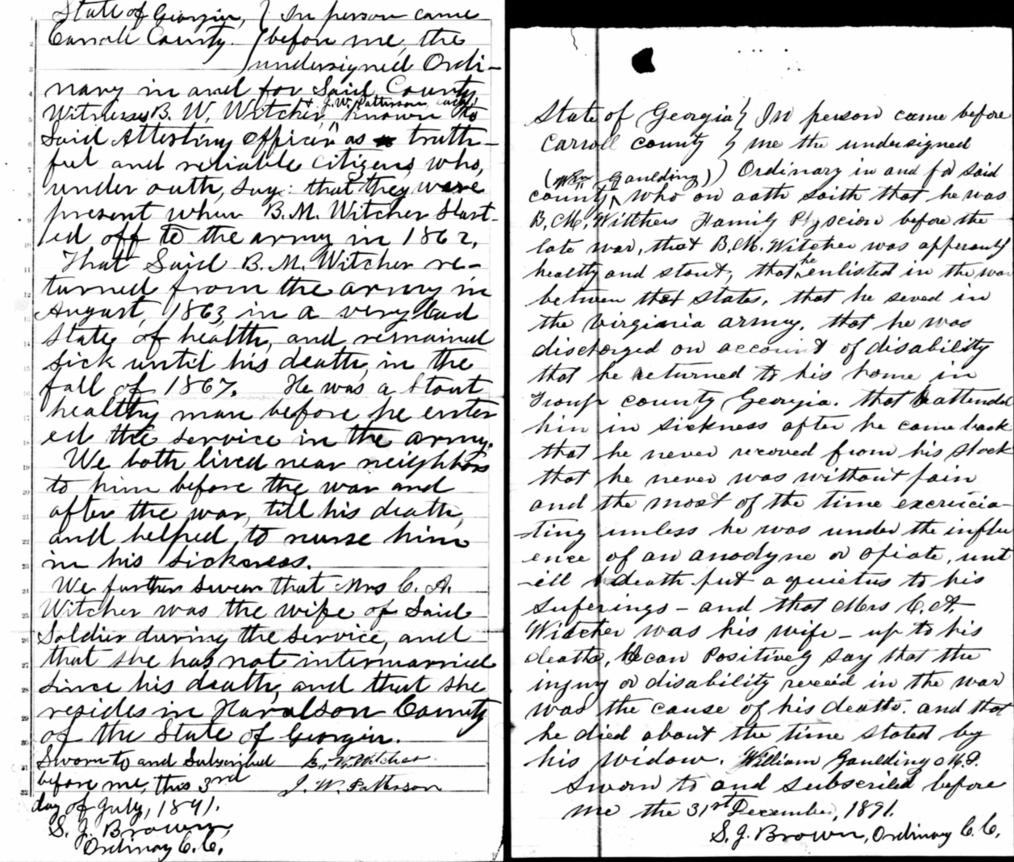 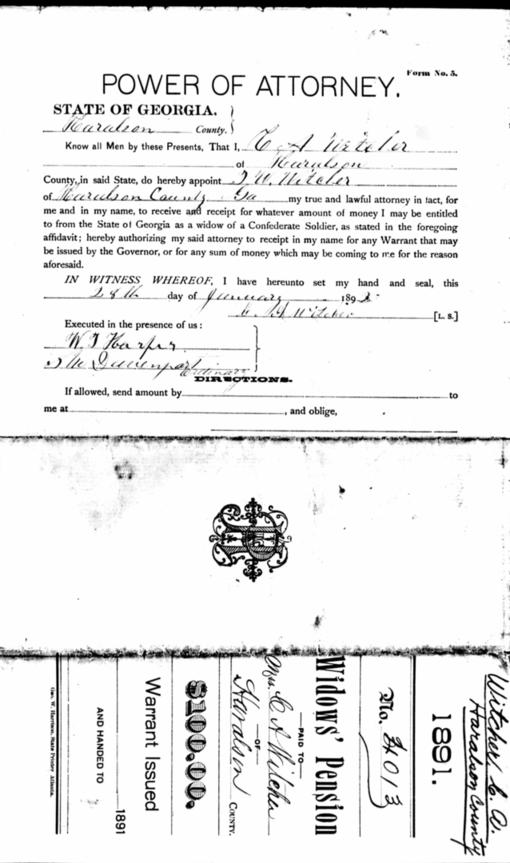 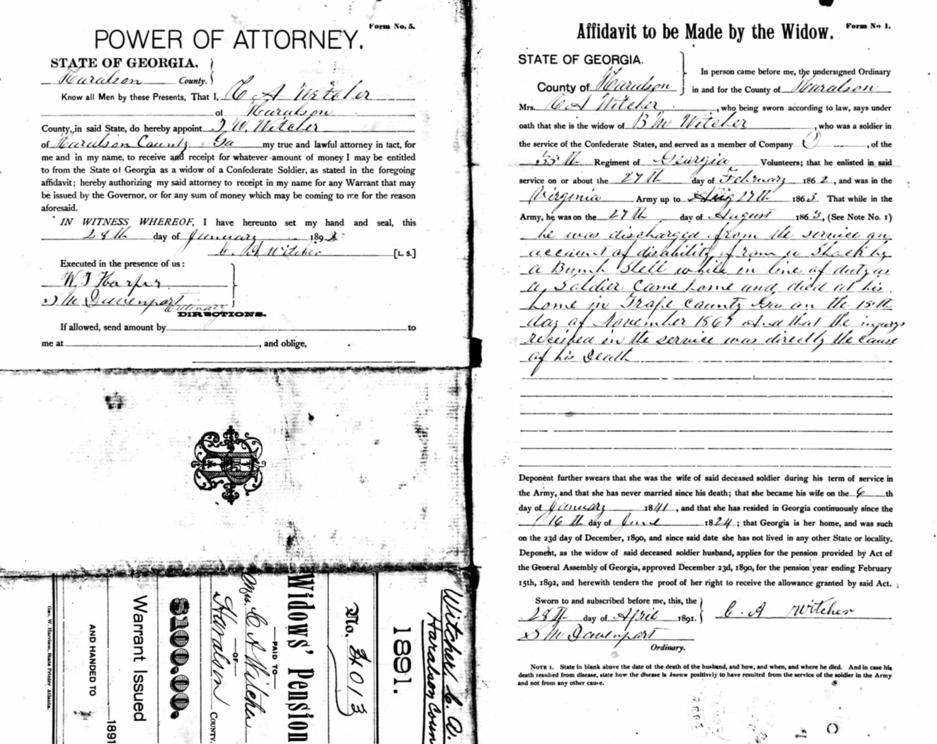 check us out on our Facebook page by going to Witcher Genealogy and asking to be friended.

Here is an interesting article about the 35th Infantry in which Ben did serve.

This company muster roll for November and December, 1862 for Benjamin M. Witcher indicates he was "absent for sickness.

Benjamin was treated for several months in the Chimborazo and Camp Winder Hospitals. For part of the time, he served as a "nurse" as he attempted to recover.

According to this discharge certificate, Benjamin M. Witcher was fifty-one years old when it was issued (July 19, 1863), thereby indicating that he was born in 1812. This certificate also states that he was born in North Carolina, was 5'11" tall, of fair complexion, had blue eyes and white hair, and that he was a farmer by occupation at the time of his enlistment.

The certificate also lists general disability, old age, and an "intermittent fever which so far proved incurable," for reasons of his discharge. 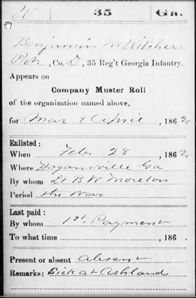 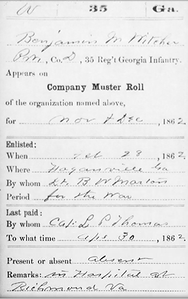 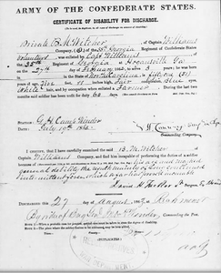 As I researched Benjamin M. Witcher, and his wife Candis, I couldn’t help but feel a great deal of empathy for the plight of this family. At the end of this generation, it was obvious that the good fortunes of this branch of the Witcher family were in decline.

​Born to relatively prosperous parents (James and Tempy), like most male children in that region did, Benjamin left his family home to make it on his own in the rugged wilderness of Northern Georgia.

​In 1832 Benjamin M. Witcher won land in the 1832 Cherokee Land Lottery. His portion was in the 23rd district, 3rd section, lot 116. This land was just north of Rome, Georgia, in what was then to be known as Floyd County. As of now, the deed records are yet to be discovered and examined, but I expect to find that Benjamin never settled this parcel of land. This assumption is based on census records. ​The land lottery rules stated that to be eligible you had to be at least eighteen years of age and had to have resided in the state for at least three years prior to the drawing. Ben was around 19-20 years of age when he won the lottery and that his parents James and Tempy had resided in the state of Georgia since at least 1819. Click here for that evidence.

​Based on applications for Civil War widow pensions, we know that this Benjamin M. Witcher was married to a “C.A. Witcher,” and this certain lady is the same one listed in a marriage certificate record dated January 6, 1841, in Campbell County, Georgia.

C.A. are the initials for various spellings of Candis. On her marriage certificate she is listed as C.A. Brooks. Census records list her as “Candar” and “C. Witcher.” Tax records from Haralson County, Georgia, alternately list her as “C.A.” and “Candis Witcher.”

Looking at all the evidence, I am choosing to archive her name as “Candis Adeline Witcher.”

From the Civil War widow pension applications, I know Candis was born in Georgia on June 24, 1824. She was between 17 and 18 years of age when she married a much older Benjamin M. Witcher, who was 29 years of age at the time. I assume Candis died in 1895, because as of this date I can find no further request for the Widow’s pension beyond that year.

The age of Ben, when he did marry, causes me to wonder if he was remarried as a result of the death of a previous wife, but no such record have I found that could support this supposition.

Apparently, the newly married couple settled down in Carroll County, Georgia, as there is a 1842 tax digest record which lists B.M. Witcher, along with Ben's younger brother D.H. Witcher and 1st cousin A.J. Witcher (son of John and Polly Witcher).

A few years later, the 1850 federal census records show that Benjamin M Witcher and "Candar" A Witcher was living in nearby Paulding County, Georgia, with sons Noble D Witcher and Isaac Witcher.

There is a Production of Agriculture tax list which gives details about the small farm which Benjamin and Candis lived on. Eighty acres are listed, forty in production and forty unimproved. The total value of the farm is listed at $500. However, Ben didn't stay long on the farm because a deed record(s) shows that BM Witcher had sold his land holdings just after the 1850 federal census was taken.

There are deed records in the Paulding County Superior Court which list a BM Witcher and a B(W?) Witcher. One deed is dated December 25th, 1850 (yes, Christmas day); the other is dated December 1st, 1851. Each deed is for forty acres. One tract sold for $175 dollars, the other for $8 dollars. It would seem that this is the apparent sum of the eighty acres listed in the 1850 Paulding County tax list for BM Witcher. The $8 price of one tract would reflect the value of scrubby, undeveloped land, while the $175 price of the other forty acre tract would be more in line with what could be expected for tillable land. Plus, the proximity of the two tracts, both being in the 19th district, the 3rd section, lots 634 and 702 respectively, would indicate single ownership.

However, while the facts add up, the names on the two deed records at first glance indicate two different people, one being BM Witcher, while the other is B(Benjamin)W Witcher. To avoid droning on about this one point, I will just state that I believe that what looks like BW is actually BM. This is due to the very heavily styled and scribbled cursive on the deed for "BW" Witcher. On one deed, the BM Witcher name is plain and well written, while on the other deed, the BW Witcher name is scribbled.

In the early 1850s, it certainly appears that Benjamin and Candic had moved back to Carroll County, Georgia. On August 23rd, 1852, according to Carroll County deed records, B.M. Witcher witnessed the sale of forty acres by Seaborn J Reaves to Disken H Witcher. This record places Benjamin in Carroll County with his younger brother Diskin Witcher.

Only six years later, the 1860 federal census records place the family of Benjamin and Candis in nearby Troup County, Georgia. To date, I have found no deed records of land being bought or sold by Benjamin in Troup County, so I can only assume that he either rented or sharecropped, as that census lists him a a farmer by occupation.

​In 1862 the records for Benjamin M. Witcher then resume with his enlistment into the 35th Regiment, Georgia Infantry; a confederate regiment which participated in many famous battles. Being wounded in battle, Ben convalesced at Camp Winder and Camp Chimborazo. These camps were infamous for their bad treatment of the wounded Confederate soldier. Benjamin wrote a critical letter to the then Governor Brown about the horrible conditions found at Camp Winder. Click here to read that letter.

The 35th Infantry Regiment was organized at Atlanta, Georgia, and mustered into Confederate service at Richmond, Virginia, in October, 1861. The men were recruited from the Georgian counties of Troup, Haralson, Bartow, Walton, Chattooga, Harris, and Gwinnett. This regiment fought in numerous battles from Seven Pines to Cold Harbor to Gettysburg, and more than twenty-five percent were killed or wounded. It finally surrendered with 15 officers and 121 men.

​For a fascinating read about this regiment, I recommend reading, “Red Clay to Richmond: Trail of the 35th Georgia Infantry Regiment, C.S.A.,” by John J. Fox III. Benjamin M. Witcher is listed in this book, in the roster of soldiers in the Georgia 35th.

​Records show that Benjamin M. Witcher enlisted into this regiment on February 28, 1862 and was discharged due to disabilities on August 27, 1863, only weeks after his regiment fought in the battle of Gettysburg.

An affidavit dated April 28, 1891, made by the then widowed Candis Witcher, indicates that Benjamin M. Witcher was disabled from a, “Shock by a bomb shell while in the line of duty as a soldier.” In an affidavit dated January 18, 1895, it is stated that Ben fought in the “Seven Day Fight” and took sick while engaging in this battle. This famous battle was fought from June 25th to July 1st, 1862, just to the east of Richmond, Virginia, and cost both sides 36,000 casualties out of the nearly 200,000 combatants.

Records between 1891 and 1895 indicate that Benjamin was “strong and able-bodied” when he enlisted, was injured, became sick, was sent to Camp Winder in Richmond, Virginia, after his injury, and that the eventual cause of Ben’s death shortly after the war was disease contracted while in the service of the Confederacy.

I conclude (after studying all the documents, including two 1868, Troup County, GA deed records) that the bombshell blast injury resulted in a weakened immune system and sickness, which later resulted in his death at his home in Troup County, Georgia on November 15, 1868.

According to Candis' application for a Civil War Widow's Pension, Benjamin Madison Witcher died in Troup County, Georgia, on November 15, 1867. However two reasons cause me to believe that the date of Benjamin's death are off by at least one year.​

Firstly, two deed records from Troup County, Georgia, dated May 21 and June 19, 1868, show BM Witcher, his son Noble D, and a certain JB Witcher pledging their crop as collateral, a crop which was being grown on the McLeudon, Brid, and Redding Plantation. Secondly, the youngest daughter, Julia (Katie) was born on March 15, 1869, so says her death certificate. This would certainly indicate that her conception was around June of 1868, the same date as the deed record. This evidence causes me to believe that Benjamin died November 15, 1868, not 1867. Remember, twenty-three years passed before Candis applied for her pension, and memories do fade.

​Benjamin’s Civil War medical papers issued on July 19, 1863, state that he was fifty-one years old, was born in North Carolina, was 5'11" tall, of fair complexion, had blue eyes and white hair, and that he was a farmer by occupation at the time of his enlistment. The certificate also lists general disability, old age, and an "intermittent fever which so far proved incurable," for reasons of his discharge.

​Benjamin returned home to a war ravaged Georgia. The economy was wrecked, families destroyed, communities burned, and the hopes and dreams of a generation were forever lost. I can only imagine the emergency situation that must have existed in the household of Benjamin and Candis, with the bread-winner and provider disabled, and children’s mouths to feed.

Ben’s son Benjamin Madison would have never really known his father as his father enlisted only months after he was born and died while he was only five years old.

Of a sadder note is the baby Julia Witcher which must have been conceived only days before Ben passed away. Ben and Julia never laid eyes on one another.

Candis remained unmarried, and for at least the next twenty eight years lived a widow in the general area of Haralson County, Georgia. From the records I have reviewed, I believe it was her son Francis Asbury Witcher who cared for his elderly mother. However, there were other descendants in the area who probably assisted in the task.

​I have placed images of pension applications and war records below this article for your pleasure. Wayne Witcher