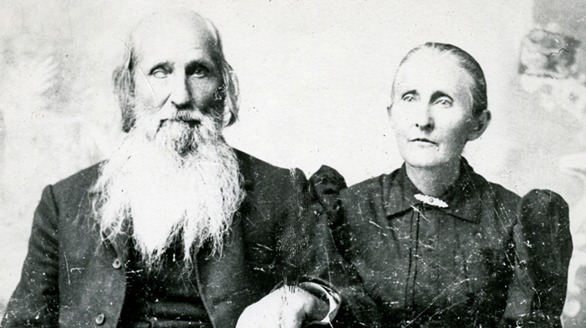 Below is a picture of the parents of Sarah Francis Beauchamp, wife of Benjamin Madison Witcher -b- 1861.

It hung on the wall of my grandparents house. The two in the picture are William Washington Beauchamp and Sarah Jane Flemming. The Witcher booklet called The Clan gives a little background on these two individuals.

I have been told by a certain Witcher patriarch that my great, great grandfather was blinded in one eye by a civil war injury. Just a family story, as I cannot verify that this particular William Beauchamp ever served in the Confederate Army.

Feel free to contact me at wwawitcher @ windstream. net
or
visit our facebook page called witcher genealogy.
Just ask to be friended.

Benjamin M. Witcher -b- 1861 was born in Georgia, just a few months after the War of Northern aggression commenced. He was not very old when his father, Benjamin M. Witcher -b-1812, died from war injuries and sickness resulting from his service in the Confederacy. The War resulted in poverty for many families in northern Georgia, and this family was no different. Absent a father, Benjamin labored with his older siblings to help his mom feed herself and those she had to care for.

The 1870 Federal Census indicates a nine-year-old Benjamin M. with mom "Candus" working as a sharecropper on Joseph Bohanan's farm, with brother Noble living in another house on the farm. This farm was in Coweta County, Georgia, in the same general area of northwest Georgia in which this family was found in previous censuses.

According to his mom’s application for Civil War Widow's Pension, Benjamin’s dad died in Troup County, Georgia, on November 15, 1867. However two reasons cause me to believe that the date of his dad’s death are off by at least one year.

​Firstly, two deed records from Troup County, Georgia, dated May 21 and June 19, 1868, show BM Witcher, his son Noble D, and a certain JB Witcher pledging their crop as collateral, a crop which was being grown on the McLeudon, Brid, and Redding Plantation. Secondly, the youngest daughter, Julia (Katie) was born on March 15, 1869, so says her death certificate. This would certainly indicate that her conception was around June of 1868, the same date as the deed record. This evidence causes me to believe that Benjamin’s father probably died November 15, 1868, not 1867. Remember, twenty-three years passed before Candis applied for her pension, and memories do fade.

On a sad note, I feel that Ben’s father never laid eyes on his youngest daughter Julia Witcher. However, what a beautiful lady Julia became, and her marriage to Thomas Beauchamp resulted in a handsome and successful family; that being the record of a certain 1910ish family photo I possess.

​The 1880 Federal Census shows an eighteen year old Ben (listed as son) still living with mom C.A. [Candis A.], and brother Francis [Frank], sisters Ira, and Julia [Katie]. NOTE: The name Francis and Frank are interchangeable in this family line. In fact, the family Bible imaged on this site was in the possession of the descendants of this "Francis" who was known to them as great-grandfather "Franklin" or Frank for short.

An 1880 Heard County, Red Bone district, Georgia tax record lists a Ben. M. Witcher as owner of 60 acres of land. Interestingly, days later, the 1880 Federal Census lists Benjamin M. Witcher, age 18, living with his mother C.A. Witcher in Heard County, Red Bone district, Georgia. This is almost certainly the same individual, and causes me to think that the young man had purchased land, but was still living at home with mom.

​On December 19, 1886, a marriage license was issued in Haralson County, Georgia, and Ben left his mother's care and married Sarah Francis Beauchamp.  Yes, you probably noticed that Ben and his sister Julia both married Beauchamps. Thomas (Julia’s husband) and Sarah Beauchamp were brother and sister.

We know that as of 1890, Ben and Sarah were residing in Haralson County, Georgia. Haralson tax digests indicate that Benj. M. Witcher had 100 acres of land. However, after 1890 and before 1892 and incident occurred which would alter this branch of the Witcher family tree.

Stories from those who had a firsthand relationship with Benjamin indicate that violence of some sort erupted on Ben’s farm which forced him to relocate, first to northern Texas, and then on to his new homestead in southwestern Oklahoma.

According to one account, Ben encountered a man who had set up a whiskey still on his land. That encounter eventually resulted in a fight between the two men, which resulted in either a injured or dead moonshiner.

​Many years have faded memories of the exact details of this incident, with one account being that the man was killed, while another account seems to indicate that the man was severely injured. By all accounts the event meant that the family had to be hurriedly packed into the wagon and a swift exit from the state of Georgia ensued.

As time permits I will continue to research Haralson County records to validate or dispute this story. It has been told to me that Ben’s brother, Frank Witcher, was in law enforcement at the time, and this relationship allowed enough wiggle room for Ben to put up his land as bond and then get out of town before he was arrested.

At any rate, between 1890 and 1892, Ben (age 28-31), his wife Sarah, and the young Witcher children left for north Texas. The 1900 Federal Census indicates that daughter Sarah was born March of 1889 in Georgia, while son Isaac was born in May of 1892 in Texas. As of May of 1900, the census record indicates that the young family was living on their new homestead in Washita County, Oklahoma.

I have personally visited this old homestead with its WPA cedar windbreak, planted during the dustbowl days of the Great Depression. All of the old wooden framed structures have crumbled into the prairie dirt. Only their foundations and the occasional scribbling of names and dates in the crackling concrete remain.

​I was told a story about Benjamin Madison Witcher and a few other men taking a wagon to Lawton, Oklahoma to gather wood for the New Hope school house/community center which would be erected shortly after 1900.

​On the way back from Lawton, riders crested a swell in the land to bushwhack those in the wagon. As the story was told to me, one of the riders fired his pistol at the wagon and succeeded in winging Ben in the front of his skull, knocking him unconscious. It must have appeared to all that Ben was dead, but he did live to tell the story to his children and grandchildren, all of whom loved to place their finger on the indention on his forehead. Such were the wild days of the early Oklahoma frontier.

​The old homestead was 160 acres in size, and the original dwelling was a sod house. Later, the sod house would be replaced, first with one wooden structure, then others. Over forty wonderful years were spent on that land, and from it grew yet another generation of Witchers who would eventually populate Oklahoma with the same pioneering spirit inherited from their forefathers.

In a booklet called “The Clan,” written by my great aunt Cleo Ella Dunham, Cleo retells her experiences as a young child on that old farm place. I hope to one day type that book out to share with you, but for now, I’ll quote her experience of lifting water out of the old hand-dug well.

“The difficult part of my job was drawing up the water from a 35 foot hand dug well. My father dug it by hand and built a curb around it as high as I was tall. There was no danger of my falling in. There was a pulley on the rafters about it, and a big, heavy bucket attached to it which held three gallons. I always tried to avoid filling the bucket when I lowered it, as I only needed one gallon to fill the water pail. There was always some water left in the bucket, so I drank from it. I’ve never tasted water quite so cool and refreshing.” A quote from “The Clan.”

One day in the late 1970s, while working for a survey company as a young man, I pulled a survey chain across that very property. As was my habit, looking for old artifacts, I scrounged around the ruins of the place and found that very same water well. Of course not knowing who the property once belonged to, imagine my surprise when I brushed aside the prairie grass to see the name “Witcher” scrawled into the concrete of an old foundation which was next to the hand-dug well.

To this day, modern wells deeper than the old water well are extracting oil and gas 24-7 from beneath the old Witcher homestead; while on the surface, mule drawn binders are replaced by multinational corporate combines which every spring simultaneously thrash millions of acres of Oklahoma wheat. Gone is the simplicity, perhaps forever, of our early American heritage. Wayne Witcher.

Remembering that old homeplace, a certain poem found among some old Witcher mementos will forever immortalize what made America so great in the first place. It’s called “The Old Home Place.”

The Old Home Place:
I wonder if God in His infinite grace might recreate our old home place?
And place it in heaven on the brow of a hill where my children could romp and play at their will.
Just a few rolling acres by a cool shady nook, with a garden, a meadow, a babbling brook,
Where I could stroll as oft as I please, while the birds sing their songs from evergreen trees.
A place where my neighbors may leisurely call, where God will still be the most honored of all;
Your mother and I would be grateful enough, if it’s just like the place where you children grew up.
So, if when I pass through that beautiful gate, I could find just a simple estate, with my family at home,
And my worries all gone, I would just be delighted to call it my home.
I’d never fuss if the kids slammed the door, and I’d even be glad to sleep on the floor;
No matter how plain the old home might be, I know it would seem like a mansion to me.
What more could I ask at the end of my way – than to wake up and find my children at play,
In a land of contentment that knows no end, and my family would never be divided again. 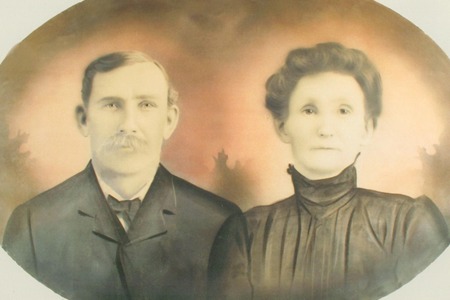