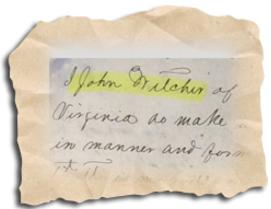 Son of John and Suzanna

John Witcher, Jr., the son of Major William Witcher of Pittsylvania County, Virginia, was married to Suzanna, and they had a son named Benjamin Witcher.

Benjamin was listed in his father’s will, which was proved in open court August 18, 1834. In this will Benjamin Witcher received “one feather bed and furniture” from his father’s estate.

From his father’s 1834 will, we know for certain that Benjamin Witcher had seven sisters, named Francis, Betsey, Owney, Tempy, Denny, Joannah, and Polly, plus one brother named James Witcher, who married Gilley Edwards.

As of the writing of this essay, I have not managed to allocate much research time to the life of John’s son, Benjamin Witcher. I have located a few records for this man in the state of Georgia, but nothing which allows me to reach credible conclusions concerning his life.

However, for your convenience, I have transcripted research from a book called, “The Witchers of Georgia,” which was self-published in 1984 by Charles Witcher. This manuscript is a very well researched accumulation of records and analysis for the Witcher families who pioneered early Georgia. Within the pages of this book is Charles Witcher’s research into John and Suzanna’s son, Benjamin Witcher. I have obtained permission from Charles Witcher to reprint his research and have thus provided his information below. I have not included the book's footnotes, but I have inserted additional paragraphs to ease the reader. Though Charles Witcher announced to me his pleasure to share his research with you, please respect his rights to the full extent the law and common courtesy mandates.

From "The Witchers of Georgia," written in 1984 by Charles Witcher, reprint by permission.


As stated earlier, the will of William S. Witcher, Sr's son John listed John's children; included among them was his child Benjamin. Since that will specifically spoke of John's daughter Polly as being deceased, it would appear that his other children, including Benjamin, were still alive when the will was recorded in 1834.

My review of the census indexes of Virginia, North Carolina, Tennessee, Kentucky, and a number of other states has revealed that neither the 1820 nor the 1830 census of these states listed a Benjamin Witcher of such an age as to have likely been the son of William S. Witcher, Sr.'s son John. The Georgia records have, however, revealed the presence of such a Benjamin Witcher in Madison County, Georgia from as early as 182, through as late as 1870.

Although there is some inconsistency in these records as to Benjamin's age, they indicate for the most part that he was born about 1792 or 1793 in Virginia. Since James Witcher, the son of William S. Witcher, Sr.'s son John, was born in 1792, it is very likely that John's son Benjamin would have been born within a few years of 1792.

It will also be recalled that John's son James apparently moved into Morgan County, Georgia sometime between 1813 and 1816. The fact that Morgan County lies about twenty miles southwest of Madison County would seem to lend some further support to the probability that the Benjamin Witcher found in Madison County from 1821 through 1870 was the Benjamin Witcher who was the son of William S. Witcher's son John and therefore the brother of John's son James.

Nonetheless, the evidence is so far from conclusive that it is only with considerable reluctance that I have included the discussion of this Benjamin Witcher in the part of this volume that deals with William S. Witcher's son John.

Regardless, the Benjamin Witcher who is the subject of the present discussion (i.e., the one who is believed without great certainty to have been the son of William S. Witcher, Sr.'s son John) married a Jane Clements on March 22, 1821 in Madison County, Georgia. Her more full name was Mary Jane Clements Witcher, and she was the daughter of Charles Clements and Sarah Meeke Clements.

Jane Clements Witcher was reportedly the second wife of this Benjamin Witcher, who is said to have had three wives.

According to one source, Benjamin is rumored to have left his first wife in Virginia when he and his brothers fled from there south to Georgia to avoid prosecution after killing a man.

Benjamin is further said to have had three wives and a total of twenty-one children, seven children by each wife.
Another source has indicated, however, that Jane Clements was his first wife.

The 1830 census of Oglethorpe County also showed that one male slave, born between 1820 and 1830, was also living with Benjamin Witcher and his family.

Benjamin Witcher was evidently living in Madison County in 1832, as the 1832 Gold Lottery of Georgia listed him as a fortunate drawer residing in Colley's Militia District of Madison County.

I believe the apparent son born between 1820 and 1825 was John F. Witcher, since he was born in about 1822 and was living relatively close to Benjamin in 1850, 1860, and 1870, and no other white Witchers have been found in Madison County during those years except for Witchers later discussed as offspring of this Benjamin. Furthermore, one source has stated that this Benjamin Witcher had a son named John. One of the two sons born between 1835 and 1840 was evidently Benjamin's son William Henry Witcher, who was born in 1839.

There is little doubt that the persons named in the above paragraph were in fact children of Benjamin and Jane Clements Witcher since one source has stated that the children of Benjamin's first marriage were Charles, John, Thomas, Daniel, William, Henry, Sarah Meek, Harriette, and Mary Jane.

Despite the fact that another source has stated that Benjamin had a first wife whom he left in Virginia, clearly the above-named children are considered to have resulted from Benjamin's marriage to Jane Clements Witcher, whether it was in fact the first or the second marriage.

These same persons were living together in Madison County for the 1870 census; the years of birth given for them by the 1870 census were consistent with that given by the 1860 census, except for the fact that the 1870 census showed Benjamin's presumed wife Martha as having been born in about 1831, while the 1860 census indicated that she had been born in about 1825. As stated earlier, mistakes were often made by the person providing the information to the census-taker, and then too, there is a tendency in certain women to state that their birth occurred in later years as they themselves progress towards their later years.

The only further information I have regarding this Benjamin Witcher is that he was reportedly buried in Crawford, Georgia, in Oglethorpe County.