From the Pittsylvania County, Virginia, personal property tax records, one can estimate that Daniel K’s father had migrated to the area of Sumner County, Tennessee, around 1798-99. It’s important to note that on October 26, 1799, Smith County was formed from Sumner County, and subsequent to that division, Daniel K’s father owned land in the newly formed Smith County, Tennessee.


Daniel Witcher died in 1815 in Smith County, and within his will, he specified that once his son Daniel K. reached 21years years of age, he was to receive land and personal property from his father’s estate. Because of this document, we know that Daniel K could not have been born before 1794. Click here and here to read more about the life and ancestry of Daniel Witcher of Smith County, Tennessee.

This composition will briefly examine testimony and court depositions given by those acquainted with, or were related to, Daniel K. Witcher.

In the late 1850s several of Daniel K. Witcher’s youngest children sued his estate, alleging they had been cheated out of their inheritance by, among others, an older brother, whose name was William P Witcher. The case from which I will cite is, “Witcher, W. Hogan et al, vs., McKaughan, William D. et al.”

I wish to express my gratitude and thanks to researcher Mitzi Freeman who provided me images of the original court documents! You can visit her webpage by clicking here.

The significant details of the case, such as legatee names, and dates of birth, have been checked and re-verified. However, due to the stylistic cursive of the day (i.e., sloppy, disconnected shorthand), be aware that I may have misinterpreted a few nuances within the extensive body of testimony presented in this case.

From the chancery case papers, we do know for certain Daniel K. Witcher died intestate and was the owner of significant personal and real estate property. His land holdings were in Jackson and Macon County, Tennessee.

Since Daniel K. died without a will, Jackson County court appointed George M. McWhorter as executor of Daniel’s estate. McWhorter’s testimony in the chancery case indicates he was appointed by the court in November of 1845.

From the sale of Daniel’s estate property, which included slaves, $2097.96 was collected. A summary of the estate’s Returns and Vouchers was submitted to the Jackson County court on the, “first Monday in March 1853.”  Interesting details include a payment made to “Cornwell and Mitchel” for the purchase of a coffin. The price for Daniel’s coffin was a handsome sum of $9.86, paid by the estate to the undertakers for their services.

After the estate’s liabilities were settled, a total of $339.89 in cash was left. Testimony given by the estate’s administrator is unclear about when the heirs were paid, but the records seem to indicate the disbursements were made in 1853.  We do know the cash was divided in eight parts, and each of Daniel’s children received $42.48.

The distribution was made as follows:

In November of 1849, Jackson County court ordered that Daniel K’s real estate holdings be sold to the highest bidder. The court clerk was to assure that a minimum price was fetched. Accordingly, case testimony indicates that in 1850, three tracts of land were sold for prices above the minimums set by the court clerk. Deeds were therefore drafted, witnessed, signed, and filed by the parties involved. To those involved in the purchase of their land, everything seemed legal and above board.

However in 1857, after several of Daniel K’s children had exceeded the age of twenty-one, they sued the estate’s administrator, their eldest brother, and those who were otherwise involved in the sale and purchase of their father’s land, including the new owners.

The allegation’s included the assertion that William P. Witcher had pretended to be their guardian and defrauded them of their due from a fair sale of their father’s real estate holdings. It was alleged that he and the executor, Attorney George McWhorter, were derelict in duty when they approved the sale of three tracts of land to three individuals for much less than the land was worth. The plaintiffs stated the land was sold for around $600, when in fact the land should have been sold for at least $3000, a point vigorously denied by every defendant.


The case papers include page after page of deposition taken from the land owners, neighbors, and family members about the worth of the land in question. For example, one of the three tracts of land, which was located on the Cumberland River at the mouth of Hensley Creek, was described as a very “sickly place.” Out of the 100 acres in that tract, less than ten acres was considered tillable. The rest was filled with boulders, rocks, and was prone to flooding. One person testified that the whole 100 acres was worth only $50, while William P. Witcher testified he wouldn’t live on it, “if it was given to him.”

Importantly, depositions were taken in order to validate the ages of some of the individuals listed in the lawsuit. In the process of obtaining and authenticating the ages of some of Daniel K’s children, some very interesting conversations have been preserved.

For example, testimony given in 1860 indicates a determined Tandy K. Witcher was going to find his brother, William P., and, “get what was coming to him from his father’s estate.” However, cross examination determined that W.P. had paid him “all that was due.”

In July of 1860, at a farmhouse in Jackson County, Tennessee, William P. Witcher was deposed. “Was you guardian of Hogan and did you pay him” William P. answered, “I am not nor was the guardian of [Williams] Hogan Witcher”

William P. Witcher went on to state that David Griffith was Hogan’s guardian, but he (William P.) had borrowed from Griffith the portion of money due his brother. William P. maintained that after his brother reached twenty-one years of age, he paid Hogan all that was due him from the distribution of the estate, though William P. couldn’t seem to find the receipt of that payment. William P. Witcher continued to testify that after he paid Hogan, his brother said, “he was fully satisfied and would never bother nor trouble any one about the matter anymore”

William P. Witcher also indicated to his interviewers that he was indeed the guardian of his sister Martha F. Witcher, and that she was “born feb 20 and was 20 after last feb”

The dragnet for this case was far and wide, including testimony obtained from individuals who had relocated as far away as Texas and Kentucky. A succession of hapless, beleaguered purchasers of Daniel K’s land testified before the court that they were innocent and prayed relief from the court. Apparently the court refuted all claims made by the plaintiffs, as no evidence has been located indicating a ruling favoring the petitions made by the youngest children of Daniel K Witcher.

Fortunate for us, the case has preserved many clues relating to the immediate family of Daniel K. Witcher.

We know Daniel K. was married to a woman named Kirby. It is published that Daniel was married to Martha Kirby, though I have not seen evidence proving this. I have located a truncated transcription of a November 15, 1838, entry in book E, pages 321-322, for Jackson County, Tennessee, which states that "David K. Witcher" and wife Martha H. Witcher conveyed land to a certain Woodfolk. I suspect strongly that "David K" is actually Daniel K. Witcher, though I have not seen the actual document. It should be noted that certain transcriptions of the Witcher vs. McKaughan case are inaccurately transcribing the name "Daniel K Witcher" as "David K Witcher." Having seen images of the original court documents, I can say for certain "David K Witcher" is not found in those case records.

The 1850 federal census record for William P. Witcher’s household reveals that his brother Jesse was apparently living with him, as was probably his sister Martha, though Martha’s given age in the census differs by four years from the age given in court testimony.

Chancery court records indicate that Daniel K. Witcher’s son, Daniel G. Witcher, had died around August of 1849. Preceding his death Daniel G. had married a woman named Nancy. This woman would be named as the guardian of Daniel G’s only known child, a daughter named Martha G. Witcher. I presume that Martha G. was born in 1850, as court briefs from that year reveal the infant had just been born.

Also of much importance, case documents dated from the late 1850s indicate where some of the children of Daniel K. Witcher had migrated to.

Jessie J.Witcher was listed as having moved to Barren County, Kentucky.

William P.Witcher is listed as having moved to Monroe County, Kentucky. The 1860 federal census indicates he was employed in that county as an attorney at law. Interestingly, in January of 1845, William P. Witcher was bonded to be sheriff of Jackson County, Tennessee, with his father, Daniel K. Witcher, being one of many who bonded him for the position. There is other evidence in Jackson County records which indicates that William P. was employed as an attorney in that county too.

James “Henry” Witcher is listed as having moved to Mississippi.

Finally, Tandy K. Witcher is listed as having moved to “Kentucky.”

It must be noted that some of the chancery court records indicate Tandy’s name was Tandy “M” Witcher. However, the majority of the time in which Tandy’s name was written, it was recorded as “Tandy K Witcher.” I have therefore chosen to transcribe his name as Tandy K Witcher, and this son of Daniel K. Witcher apparently resided in Kentucky by the end of the 1850s.

There is a one-time, 1850, entry in the Witcher vs. McKaughan chancery case which states, “Tandy K by his guardian Tandy K.” The entry was difficult to decipher, but I suspect it indicates Tandy K’s guardian was initially his uncle Tandy K. Witcher.

From another Jackson County civil case, filed in 1845, a certain Tandy K. Witcher was being sued for slander. That lawsuit indicates Tandy K. had just married a woman named Malvina Dean. The Tandy K. in this suit is probably the uncle of Daniel K. Witcher, who was apparently, at least initially, the guardian of the younger Tandy Witcher. Click here to read more about the elder Tandy K. Witcher.

The Witcher vs. McKaughan chancery suit was initially filed in 1857, but subsequent proceedings extended well beyond 1860. If fact, the case was not closed until March 15, 1876, when the defendant W. D. McKaughan agreed to pay the court for its costs. A tabulation of the many proceedings, documents, and court fees detailed the legal expenses of the day. For example, one dollar was charged per deposition, filing an exhibit cost twenty-five cents, each order dismissing a suit was twenty-five cents, and one cent per word was charged for copies of certain documents. The court fees (not including the cost of the legal counsel) all added up to $77.52.

The 1876 settlement of this suit was evidence that life had slowly returned to normal after the Civil War; a war which in 1861 had so horribly punctuated life in American society, and in so doing, apparently interrupted this particular family fight, at least for a few years.

Please feel free to email me

Just ask to be friended. 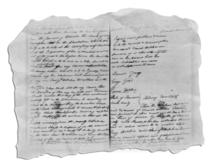