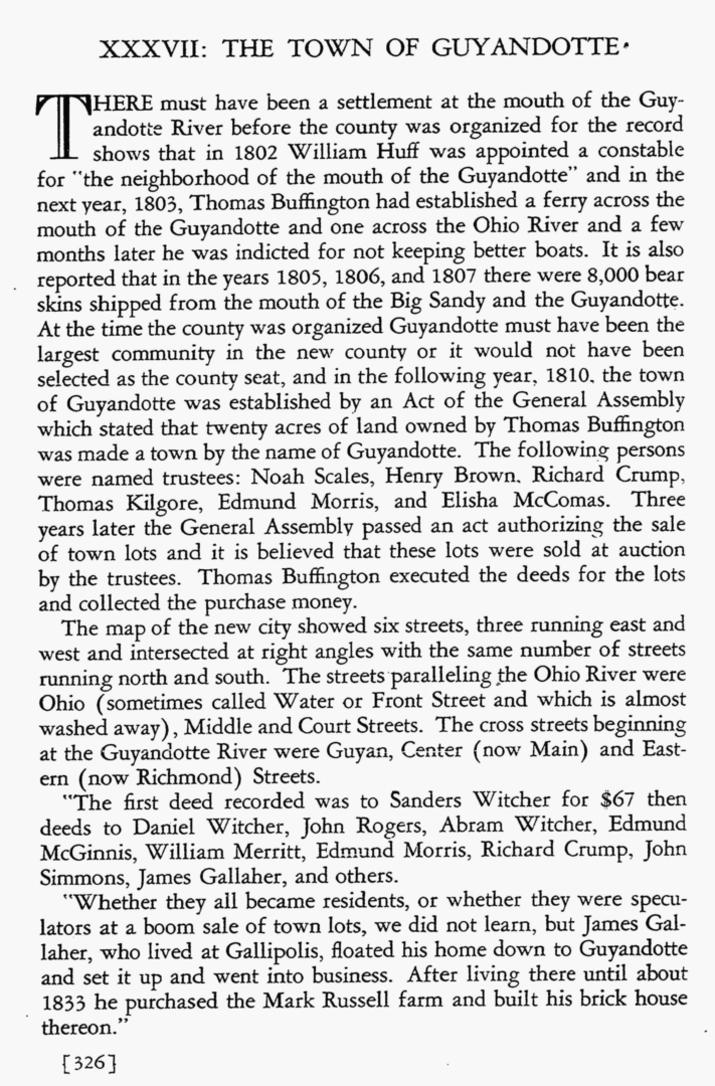 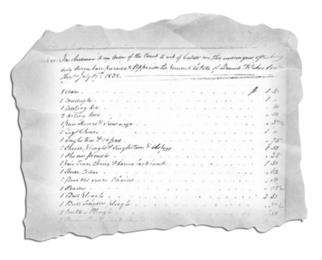 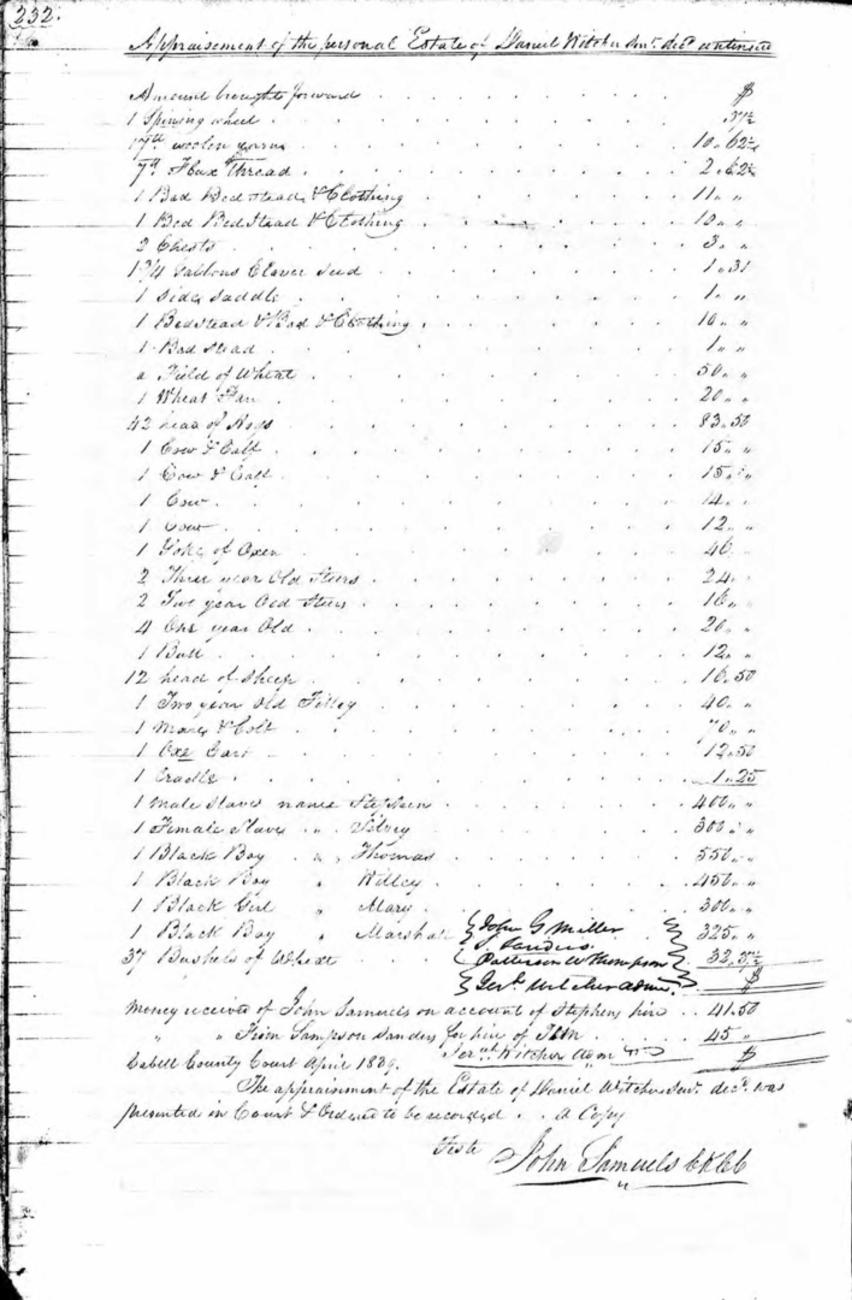 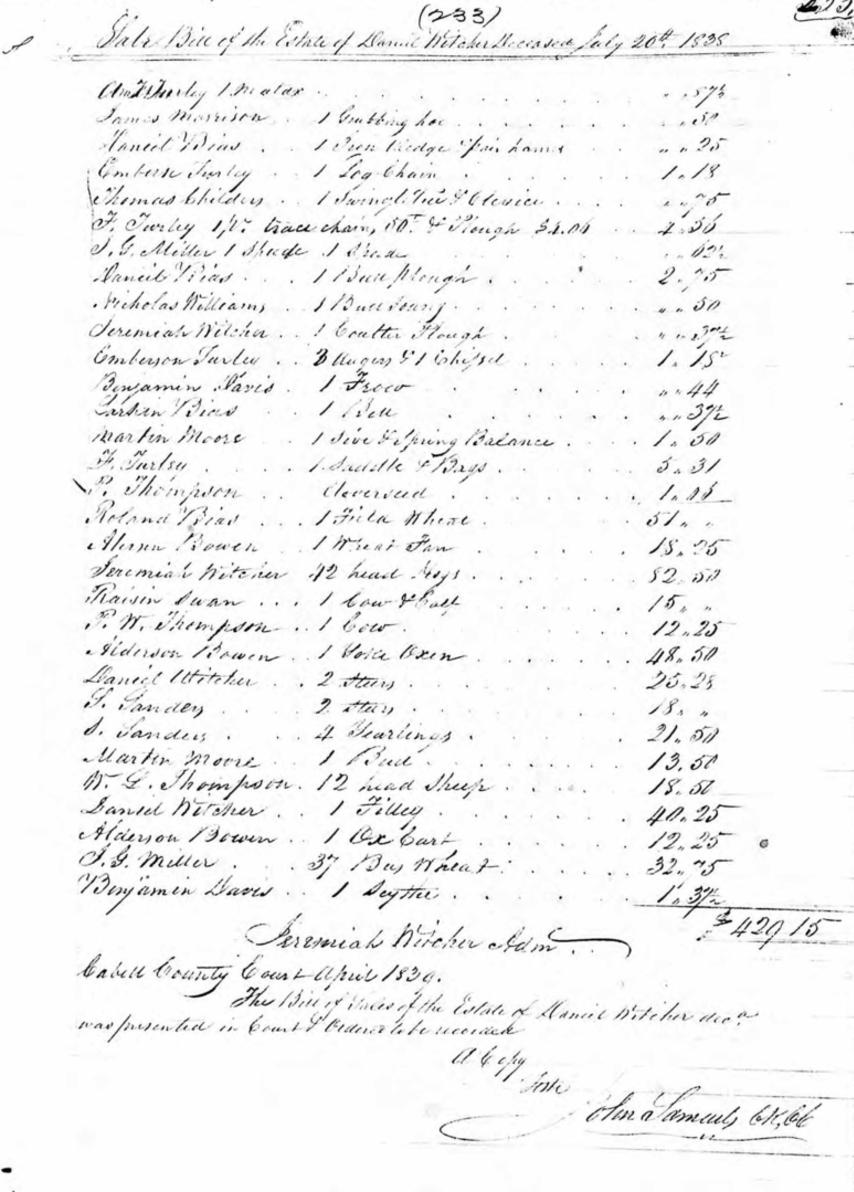 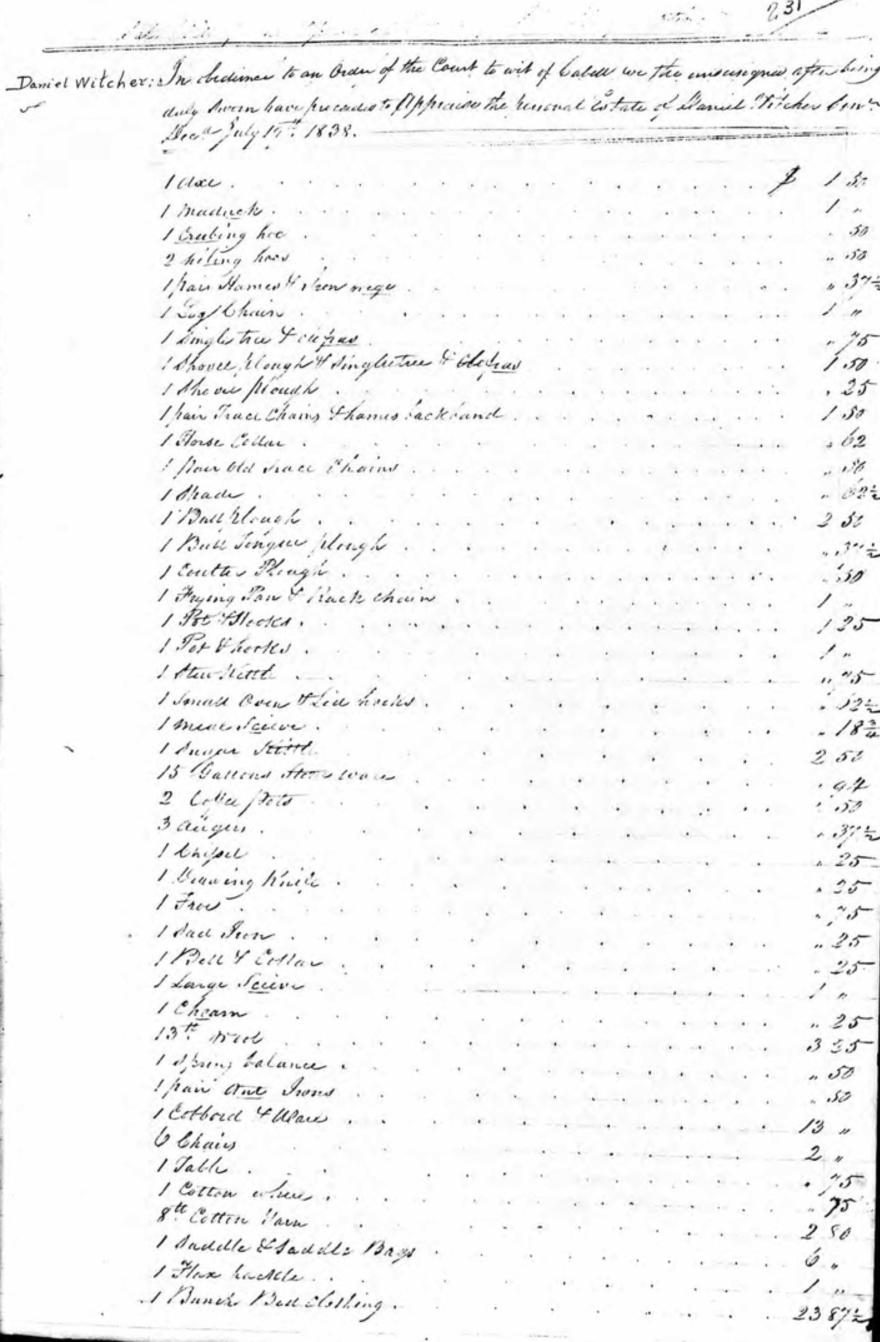 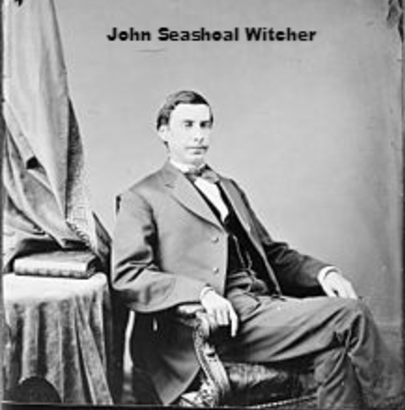 In my research of the earliest Witchers of Pittsylvania County, Virginia, I took the time to locate and spreadsheet the Pittsylvania County personal property tax records for the period 1782 through 1812. Within this thirty year period, one is able to profile the taxable Witchers living within that county during those early years.

This essay will focus on one of those men, an individual named Daniel Witcher, who was the son of Major William Witcher of Pittsylvania County, Virginia.

Based upon my previous analysis of the earliest Pittsylvania County tithable records (1767-1781), it has been proven that Major William’s son Daniel Witcher was born in or around the year 1765. Also, subsequent to comprehensive research of Bedford, Halifax and Pittsylvania County, Virginia, court records, I have concluded that Daniel’s mother may well have been Lydia Atkin/son. I also believe that Daniel’s mother died shortly after his birth. Perhaps Lydia may have died giving birth to Daniel.

Daniel, son of Major William Witcher, must not be confused with another, older Daniel Witcher, who lived in the county at the same time. To research a complete manuscript which qualifies this and my previous comments, click here to read details of that research of the earliest Witchers of Pittsylvania County, Virginia.

These early tax records indicate that Daniel Witcher began to pay personal property tax in 1786, presumably because he had reached the age of twenty-one in that year. The year 1786 was one of the very few Post-colonial years when males were considered tithable at age twenty-one. Shortly after 1786, males over sixteen were counted. The 1786 tax records indicate that Daniel was responsible for one tithable and owned one slave and two horses.

While I have not personally seen the marriage bond for Daniel, reliable sources indicate he was married in Pittsylvania County, on December 22, 1785, to Sally Ward. As we will later see, Sally was also known as Sarah. The Ward and Witcher families were well known to each other in the beginning days of Pittsylvania County, as both families were planters on the bottom lands of the Pigg River.

For the years 1790-91 and 1793-94, Daniel Witcher is absent the county’s personal property tax records. I have read other researcher's articles which report this Daniel departed Pittsylvania County in the 1790s in order to investigate the lands in Kanawha County, Virginia. In fact there are landmarks in Kanawha County (such as a creek) named Witcher. I cannot confirm or dispute the claim that those landmarks are named after Daniel, but he did at times disappear from the county, so perhaps he was exploring the unsettled lands to the west of Pittsylvania County. In 1795 Daniel again appears, but he is then listed as “Captain Daniel Witcher.” That year he was responsible for one tithable and was taxed for two horses. From 1795 till 1804 Daniel was consistently listed in the county’s tax records, apparently residing full time in Pittsylvania County during those ten years.

In 1804 Daniel Witcher was listed as responsible for three titheables. One tithable was assuredly the head of the household, Daniel. Who the other two males were, we can only guess. But we can speculate that by March of 1804, at least one son named Daniel Witcher may have been listed. I will point out that the 1850, Wayne County, Virginia, federal census indicates this apparent son was born around 1786, thus Daniel would have been eighteen years old in 1804, and therefore of age to be listed when that year’s tax list was gathered. It should be noted that in 1842, Wayne County was formed from Cabell County, Virginia.

We know for certain that Daniel Witcher was alive as of 1808, because three years after he disappears from Pittsylvania County tax records, Major William Witcher listed his son Daniel in his will. In that 1808 will, Daniel “Jr” is listed as an heir who would receive two slaves named Stephen and Anderson.

However, the 1820 census record for Cabell County, Virginia, enumerates a Daniel Witcher, who fits the necessary parameters for William’s son. In the hamlet of Guyandotte, a certain Daniel Witcher is listed in the 1820 census as a male born before 1775, who was co-habiting with a female born before 1775, and was one who owned three slaves. While from this record alone we cannot with absolute certainty identify Daniel Witcher of Cabell County as the son of Major William Witcher, the census record seems to indicate it probably was him.

In the earliest days of Virginia records, only two Daniel Witchers are found. One is the individual identified in the 1767 Pittsylvania County tithable records. Click here for more information relating to this particular Daniel Witcher, who later migrated to and died in Smith County, Tennessee.

Using the 1786 tax record, as well as other court documents, Daniel, Jr. is estimated to have been born around 1765, matching the 1820, Cabell County census parameters. Also, the ownership of slaves needs to be considered. While not unheard of, it was not common in the colonial period for pioneers to own slaves. Studies show that less than twenty percent of pioneers owned slaves. The fact that this Daniel Witcher was listed as owning three slaves directly correlates the fact that William’s son Daniel inherited two slaves in 1808, not to mention the 1804 Pittsylvania County tax record, which indicated Daniel owned four slaves as of that year.

In summary, I believe the Daniel Witcher located in the 1820, Cabell County, federal census record was the son of Major William Witcher, and based on the Pittsylvania County personal property tax records, I suspect Daniel had migrated to Cabell County by 1805.

Early deed records indicate that several Witcher men purchased land in the newly formed hamlet of Guyandotte, located in Cabell County, Virginia. This land is in the vicinity of the confluence of the Guyandotte and Ohio Rivers. This town still exists today but is swallowed by Huntington, West Virginia.  A book called, “Cabell County Annals and Families,” indicates that land in the newly formed town of Guyandotte was offered up for sale around 1812. According to this publication, the first deed recorded was land sold to Sanders Witcher, for $67. Then other town plots were sold to Daniel Witcher, Abram Witcher, and others. These deed records place Daniel in Cabell County by at least 1812. I believe he had settled the region much earlier. As previously mentioned, I suspect he and his family had settled along this portion of the Ohio River by 1805.

It’s very interesting to see the name Sanders and Abram Witcher in the Cabell County records, as at least one of these previously unassociated names (Sanders Witcher) has been observed before in the War of 1812 records. No evidence has been located which identifies how Sanders and Abram Witcher are related to Daniel Witcher, but for the time I will now associate them as sons of Daniel Witcher. It is very significant to note that apparently Daniel's father-in-law was named Jeremiah Ward and his mother-in-law was Mary Anne Sanders, before she married Jeremiah Ward. Therefore it makes complete sense that Daniel and Sarah would name two of their children Jeremiah and Sanders, in honor of Sarah's parents. It should also be noted that in 1778, Jeremiah Ward bought land from Tabitha Fips, who was the mother of Betsey (Fips) Witcher, wife of Ephraim Witcher. The point being that the Wards and the Witchers were very closely connected in Pittsylvania County in the earliest years of that counties development.

The 1830 federal census record for Cabell County indicates that the household of a Daniel Witcher was still in the county. There were five slaves listed and one female over 60 and under 69. The record is very badly damaged; however, the transcriber’s index indicates this household was for Daniel Witcher, though I cannot perceive that he is counted as such. Then again, the record is badly damaged, so perhaps from the digital image one is unable to perceive what would otherwise be determined should the original document be examined.

Daniel Witcher died July 20, 1838. This date is lifted from Cabell County probate records, in which he is also identified as Daniel Witcher, Sr.

Apparently Daniel died without a will, so the courts ordered his estate to be inventoried. That inventory, and a list of items sold, was presented to the Cabell County court during the April, 1839, session.

Those listed as buyers at the estate sale of Daniel Witcher included Jeremiah and Daniel Witcher. I presume these two individuals to be Daniel Sr’s sons. The estate records list Jeremiah Witcher as the administrator of Daniel’s estate.

As to the John Witcher listed in the 1850, Cabell County federal census, I am completely convinced that eleven year old boy is the individual later known as John Seashoal Witcher. The Biographical Directory of the United States Congress bios its former member John S. Witcher as having been born in Cabell County, Virginia, on July 15, 1839.

John S. Witcher is listed in this distinguished journal, because he was a member of the forty-first United States Congress, representing West Virginia.  Cabell County, West Virginia, was once located in Virginia, but due to the strife of the Civil War, that area of Virginia was incorporated into the state of West Virginia.

After John served as a Union brevet brigadier general during the Civil War, he apparently refocused his boundless energy in the party of Lincoln, the Republican Party. After serving one term as a U.S. Congressman, John unsuccessfully ran for re-election. However, after his defeat, President Grant appointed him to serve within his administration.

Thereafter John Witcher continued in civil service until his retirement in 1899, at which point he relocated to Salt Lake City, Utah, where he died in July 8, 1906. Apparently John was originally buried in Utah’s Mount Olivet Cemetery, but was later interned in the Arlington National Cemetery.

I have not fully researched Daniel Witcher’s lineage. This brief summary of what I have discovered is intended to provide you with clues uncovered in my research of the original Witchers of Pittsylvania County. It appears that much remains to be discovered in the Cabell County, Virginia, records. At the bottom of this essay, I have provided images of the inventory of the estate of Daniel Witcher. Depending on your browser, one may need to scroll down a bit to access the images.

Please feel free to contact me to submit corrections or any addition information you may have located.