ask to be friended 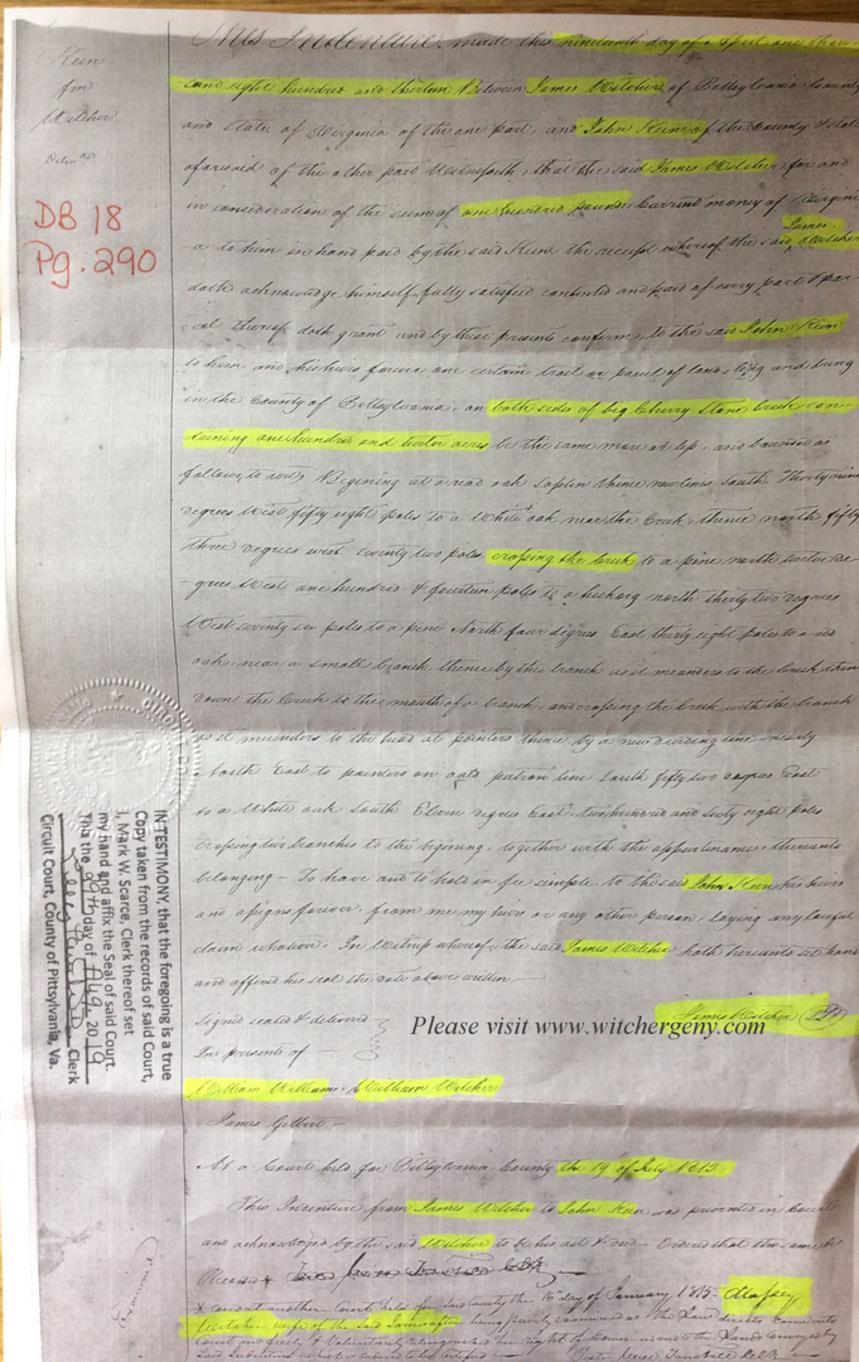 In my research of early Pittsylvania County, Virginia, deed records, I came across an 1813 deed which records a sale of land between James Witcher and John Keene.

Of even greater interest is the court action taken on the 16th day of January, 1815, when “Massey Witcher,” wife of James Witcher, was brought into court to sign away her right of dower for this tract of land. An image of this deed is provided at the bottom of this page.

A book published in 1876, called, “A History of the Pioneer Families of Missouri,” indicates on page 299 that a certain James Witcher of Virginia married a Martha Watson, “and they had three sons and three daughters.” The book also states that James and Martha’s eldest son was Ephraim Witcher, who fought in the War of 1812, married Winifred B. Holley, and moved to Montgomery County, Missouri.

I cannot help but ponder whether family researchers have knowing or unknowingly referenced the above 1879 publication, which may have errantly printed the first name of James Witcher’s wife.

While I am uncertain who this particular James Witcher descended from, I am reasonably sure that John Keene (who purchased the land from James Witcher) is the man who married Nancy Witcher. It’s very interesting to note that from the union of John Keene and Nancy Witcher, three generations later, a baby girl named Nancy Witcher Langhorne was born. Nancy Witcher Langhorne would marry Waldorf Astor, and as an American expatriate, would be the first female elected to British Parliament to take her seat. Today, we simply know her as Lady Astor, a very wealthy and famous Lady in her day. Click here to read more about Lady Astor.


Again, the woman who married John Keene was Nancy Witcher.

However, Captain John Keene’s 1878 obituary indicates that John’s wife Nancy Witcher was descended from “Vencent Witcher.”
While I have not seen the actual copy of the 1878 obituary, Maud Clement provides a transcription in her book, “The History of Pittsylvania County, Virginia.” I have broken the text block into paragraphs, for ease of reading.

This transcription is as follows,

“A noble landmark has been removed by the stern and rentless hand of death. Information was received here yesterday that the well known and highly respected citizen of this county had departed this life.

Captain Keen was nearly ninety years of age, and at one time was a prominent and influential politician enjoying a reputation throughout the state.

We regret our inability at this time to sketch even an outline of this remarkable man. For many years he was the leader of the Whig party in this country, and was honored by his party with a seat in the State Legislature which position he filled with distinguished ability reflecting credit on his constituents, and establish for himself a character for efficient integrity rarely equaled.

He was a contemporary of the venerable Vencent Witcher, the old style horse of the Whig pary, who yet survives.

No man ever lived who excelled the deceased as a man of infallible honesty. True to every interest he represented boldly and without fear or favor devoted his energy to the accomplishment of his purpose. His habits were good and remained so to his death.

Capt. Keen married Miss Nancy Witcher a daughter of Vencent Witcher of this county, and reared a large family of whom Col. Elisha Ford Keen perhaps was the most distinguished having represented Pittsylvania in both houses of the State Legislature.”

I offer no clarification to remedy the obituaries overt contradiction that Nancy Witcher was a daughter of “Vencent” Witcher. Perhaps William Witcher, Jr’s, middle name was Vincent, or perhaps the more likely explanation is that Nancy was actually a daughter of Vincent Witcher, who himself was a son of William Witcher, Jr. The actual marriage bond should be reviewed for answers. It is located in Pittsylvania County, Virginia, and is dated, 16 Feb, 1807.

I leave the above conundrums for other researchers to solve. My intent is to provide original records to assist in your research.
My personal conclusion is that, as early as 1813, the Witcher and Keene families were well known to each other, and that a certain James Witcher was married to a woman named Massey Watson. This particular James Witcher sold land to John Keen, who was by 1807 married to a certain Nancy Witcher. This particular James Witcher may or may not have been a son of Major William Witcher. Who knows, he may have been William Witcher, Jr's, son, which would make the land sale a brother-in-law deal. I leave that for you to decide.