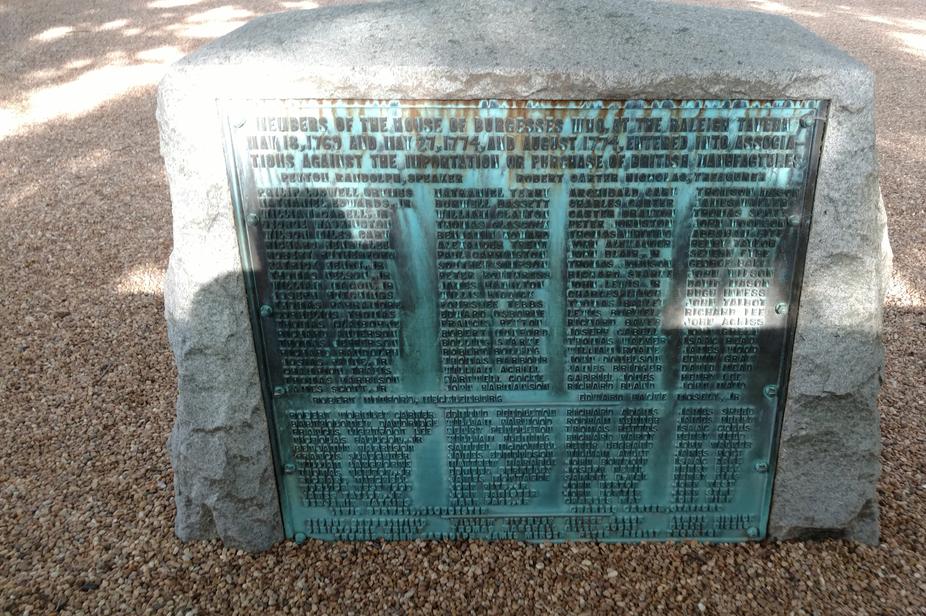 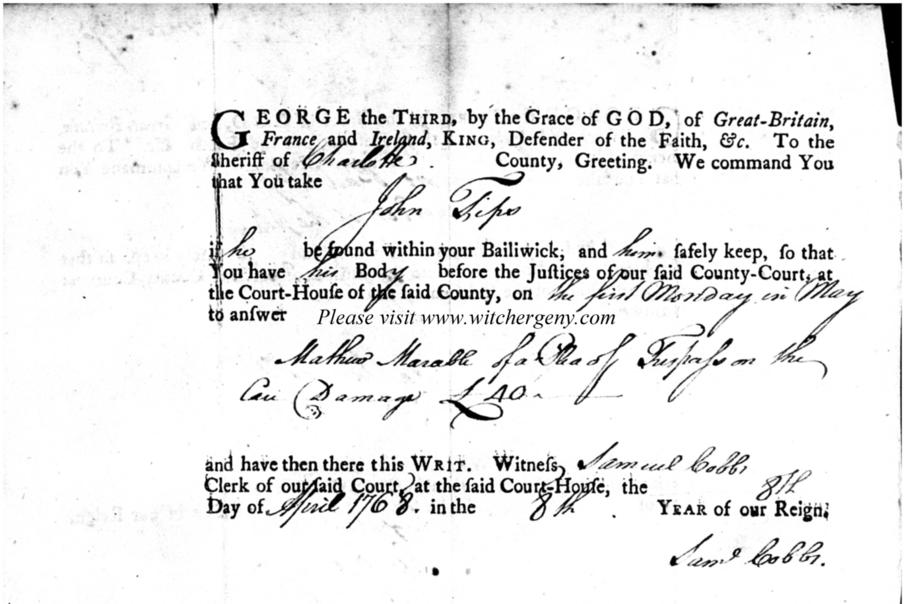 and his debt to 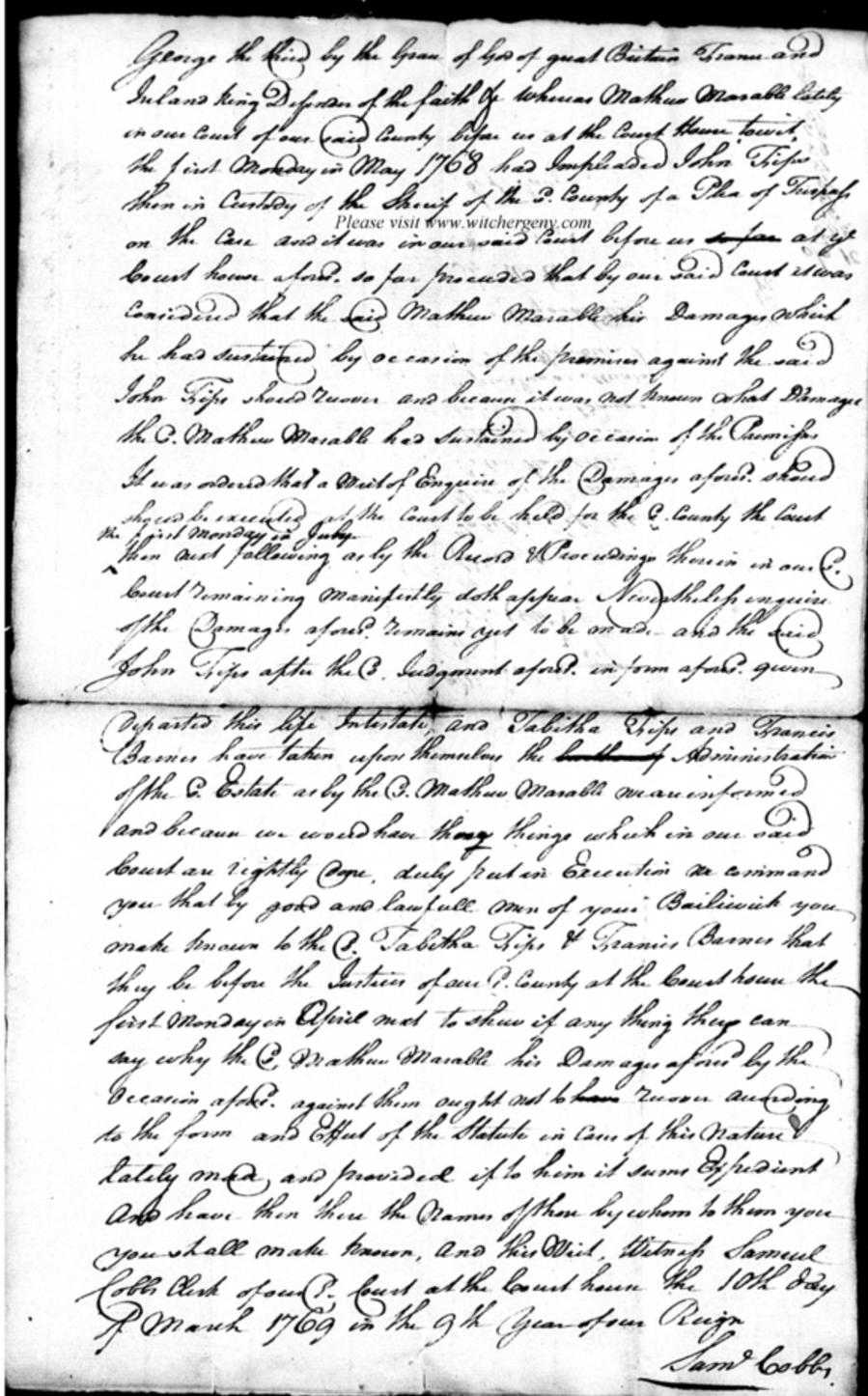 At the bottom of the page, I have attached three images of the many documents recently discovered relating to the estate of John Fips, who died in late 1768 or early 1769, in Charlotte County, Virginia. Click here to read John Fips' life story, including details of the estate battles his wife Tabitha fought.

One record (a summons to appear) reveals that John Fips had a notice to appear issued to him due to a charge of "trespass," which was actually a civil charge pressed by a certain Matthew Marable against John Fips, because John had failed to honor his debt agreement with Matthew Marable. The debt was apparently for 40 pounds, and the summons was issued in early 1768.

The next record indicates that on May 12, 1768, John Fips agreed to the court-imposed terms, which included submitting "three feather beds" and one "negro girl." If payment was made within three months, the collateral would then be returned. John Fips made his very feeble mark at the bottom of the agreement. I do wonder if this "negro girl" was the slave named Sall, which Betsey Fips, ten years later, proved was given to her by her father, when she was but a small girl. Click here to read about this deed of gift to Betsey Fips.

The third image is a record indicating John Fips had died only months after his 1768 court appearance. This estate record indicates John had died by March of 1769. Therefore, Matthew Marable was suing the estate John Fips, demanding payment.

I have also attached a picture of a monument found in Williamsburg, VA, which indicates that Matthew Marable was one of those in the House of Burgesses who in the early 1770s protested English overreach, when they taxed Virginians outside the limits accepted by the colonists. To me it seems probable this Matthew Marable is the same individual which harassed John Fips about his debt, and it is this pressure which may well have contributed to John's death.

We are so fortunate that these records have survived!

Please feel free to email me at 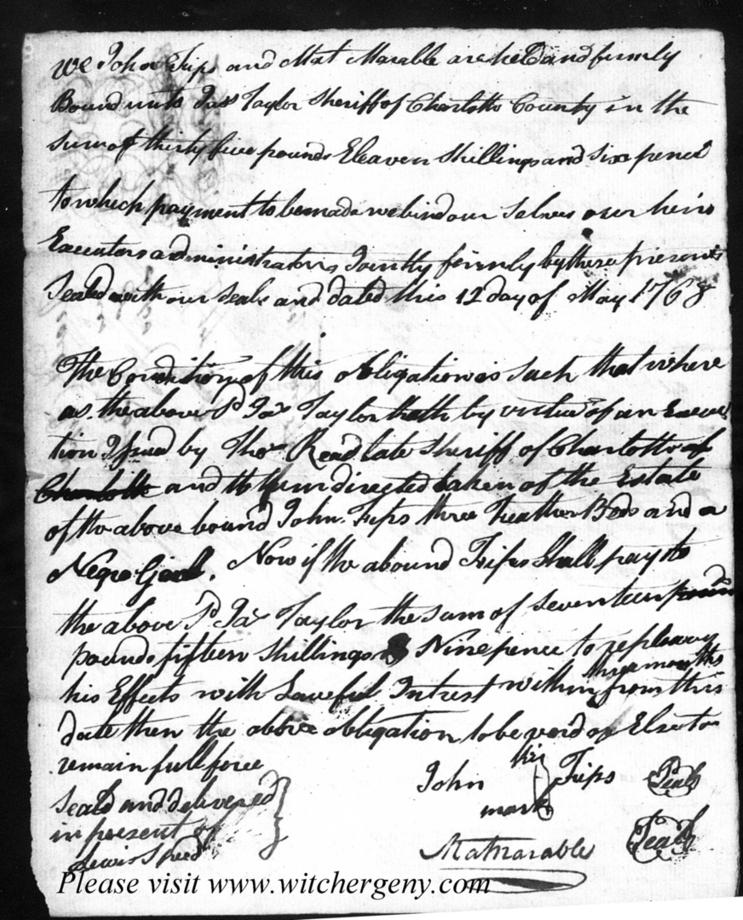