Ephraim Witcher's son Tolliver was born within a year or two of 1800.

I remain uncertain about the correct spelling of his name, as it was variously recorded as Tolliver, Toliver, Taliaferro, and Taliafero. Despite the variations in spelling, the pronunciation of these names would seem to be almost identical. (At least, the county in Georgia which is spelled Taliaferro is in fact pronounced Tollifer, and often comes out sounding more like Tolliver.)

Regardless, he is referred to herein as Tolliver for the most part, since that spelling seems to best represent the phonetic description of his name and reflects the preponderance of the spellings provided in reference to him and others of later generations who were apparently named in his honor. Nonetheless, other spellings as specifically provided in certain records are at times presented in reference to him in order to preserve the authenticity of such records and the information that they provide.

Tolliver Witcher was apparently living in Surry County, North Carolina, with the other members of Ephraim's family in 1810 and 1820; both censuses reflected the presence of males who could have been born in about 1800.

The only county in North Carolina other than Surry County in which any Witchers were found to be living at the time of the 1830 census was Ashe County, located approximately twenty miles west of Surry County. It is there, in Ashe County, North Carolina, that Ephraim's son Tolliver seems to have chosen his abode.

The 1840 census of Ashe County, North Carolina listed a Toliver Witcher among its inhabitants. He was presumably the same person as the Taliaferro Witcher who was listed in the 1830 census of Ashe County. This presumption is based on the following reasons: (a.) the similarity in the pronunciation of the names Taliaferro and Tolliver; (b.) the fact that although the Toliver listed in the 1840 census was evidently born between 1790 and 1800, while the Taliaferro as listed in the 1830 census was born between 1800 and 1810, these ages would still seem consistent for identifying the same individual, since later census records showed that he was born within a year or two of 1800; and (c.) there are no children listed under the Taliaferro of 1830 whose years of birth are inconsistent with the years of birth given for the Toliver listed in the 1840 census.

Of the four other white females re-siding with Toliver in 1840, three were born between 1830 and 1835, while the other one was born between 1835 and 1840. This seems to have been a farming family, as five of its members were listed in the 1840 census as engaged in agriculture.

By 1850, this supposed son would have attained the age of at least twenty, while the presumed daughter would have been between fifteen and twenty years of age, so in the normal course of things they would have married and established their own households by 1850. It is also quite likely that this presumed son had died by 1850, since one source which listed the siblings of Tolliver's daughter Nancy excluded this particular person.

The white male born between 1830 and 1835 who was living with Toliver in 1840 was evidently named William Witcher, who was age 17 when listed with Taliaferro in 1850 and therefore was born about 1833. (It is quite possible that William died within a few years after 1850, since his name does not appear in a listing of the siblings of Tolliver Witcher's daughter Nancy.) Both of the two white males born between 1835 and 1840 who were re-siding with Toliver in 1840 seem to have still been living with him along the time of the 1850 census, their names being reported in the 1850 census as John Witcher (b. ca. 1836) and Ephraim Witcher (b. ca. 1838).

It will be recalled that the 1840 census of Toliver's family revealed that this person apparently had three daughters born to him between 1830 and 1835, and one further daughter born between 1835 and 1840. As previously mentioned, one of them seems to have left the family household by 1850. This was apparently his daughter Zilda, who reportedly of married about 1850.

The 1850 census of Ashe County indicated that they were a farming family. According to one source, Tolliver's wife Jane had the more full name of Sara Jane, she apparently died in the early 1850's.

Though still a farmer, the Taliafero Witcher residing in Floyd County, Georgia in 1860 seems to have acquired a good deal since he left Ashe County, North Carolina.

According to the 1860 census of Floyd County, he owned real estate worth $10,000 and his personal estate was valued at $20,000, a nice improvement from his position in Ashe County, where his real estate had been valued at only $4,000.

In addition, Taliafero seems to have acquired a new wife, Martha E., who, being age forty-six for the 1860 census of Floyd County, was apparently born about 1814 in Georgia. Her presence in the family in 1860 is explained by a marriage record which stated that Taliaferro Witcher married Martha E. Price in Floyd County, Georgia on October 15, 1857. Further confirmation of this lies in the statement by another source that he married a second time after his wife Sara died.

Further-more, Taliafero also had living with him in 1860 his apparent brother, Daniel H. Witcher, who in 1860 was listed as age 64 and born in North Carolina (and therefore born about 1796); Daniel's financial position was represented only by a personal estate listed as worth $1500. (See Index for further information on Ephraim's son Daniel.)

The individual recorded in the 1860 census of Floyd County, Georgia as Taliafero Witcher (b. ca. 1800) was evidently still residing there in 1870, although that latter census listed him as Toliver Witcher. According to this information from 1870, he was a farmer having real estate valued at $4,000. and a personal estate valued at $700, was born in North Carolina, and was age seventy (and was therefore born about 1800). Residing with Toliver in 1870 was Martha E. Witcher (b. ca. 1815 in Georgia), and therefore evidently the same person as the Martha E. Witcher (b. ca. 1814) who was residing with Taliafero in the 1860 census of Floyd County.

The only person residing with them in 1870 Floyd County was an Emory Gamble, who was born about 1856 in North Carolina.

Ephraim Witcher's son Tolliver died September 23, 1874 at the home of his daughter, Lizzie Witcher Lyle, in the Rehoboth community of Floyd County, Georgia. He was buried in the family plot on the banks of Big Cedar Creek in Floyd County.

Also buried there were some of his children, presumably including his sons, Ephraim and Osborn, who were killed in the War Between the States, and also his daughter Phoebe, who died in the early 1860s.

Tolliver's wife, Martha E., seems to have also died sometime be-tween 1870 and 1880, as she was absent from the census records subsequent to 1870.

From Charles C Witcher's book, "The Witchers of Georgia." 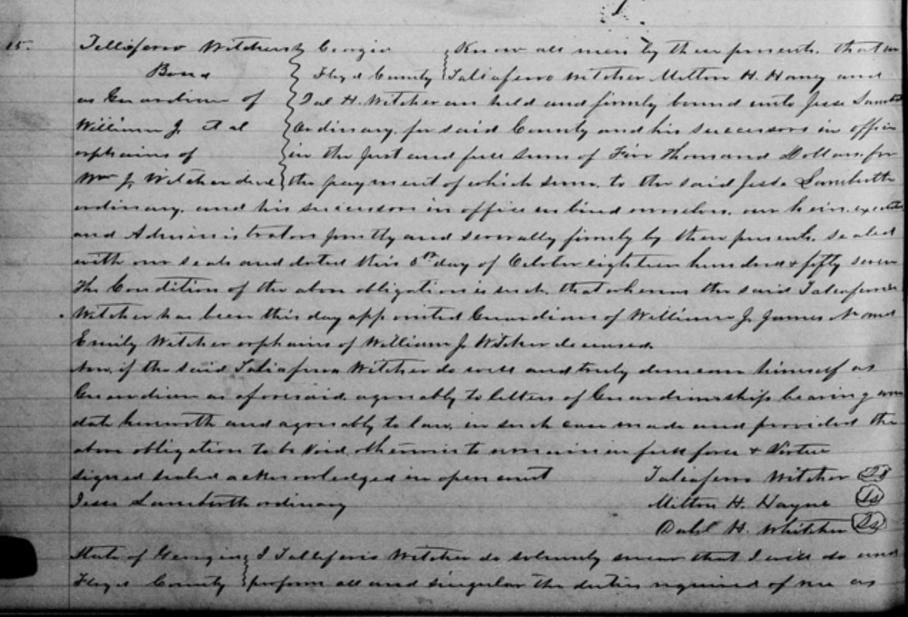 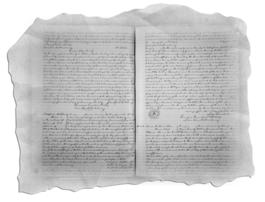 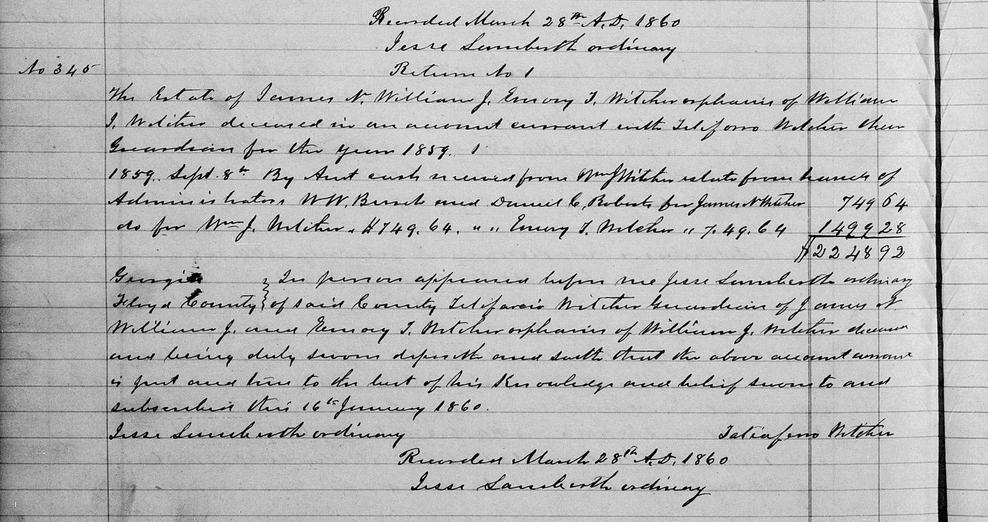 This webpage about the life of Taliaferro Witcher, the son of Ephraim and Betsey Witcher, is a digital whiteboard, where evidence of this man's life is being gathered and posted for your research convenience.

Along with images of court records for Taliaferro,  I have included a chapter from Charles C. Witcher's book, "The Witchers of Georgia," published in 1984. It is by the author's permission that I present this chapter. Please respect Mr. Charles Witcher's rights to the contents of this book.

For ease of reading, I have reformatted the paragraphs.   w 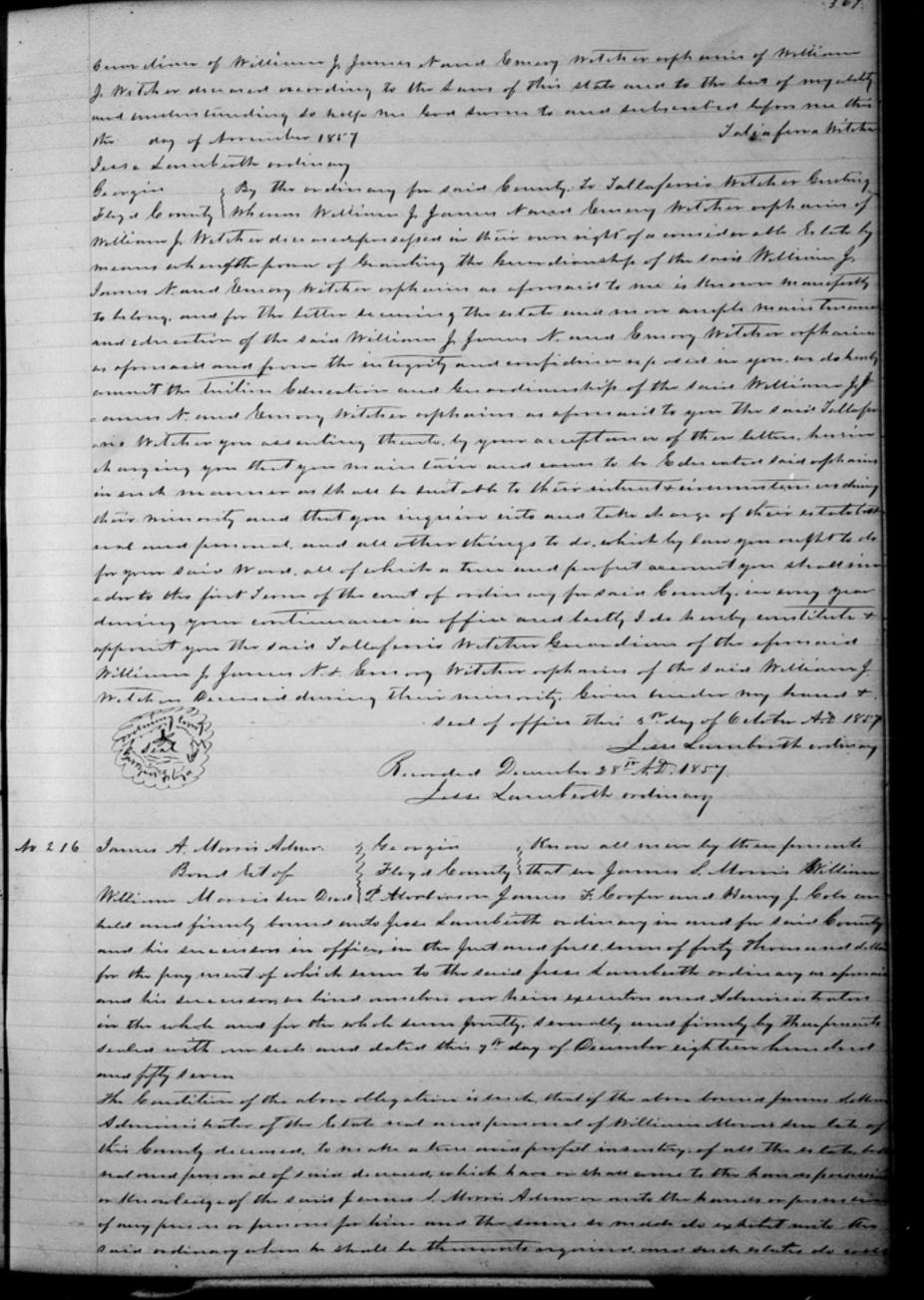