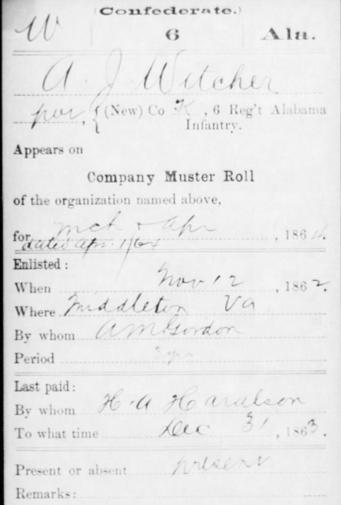 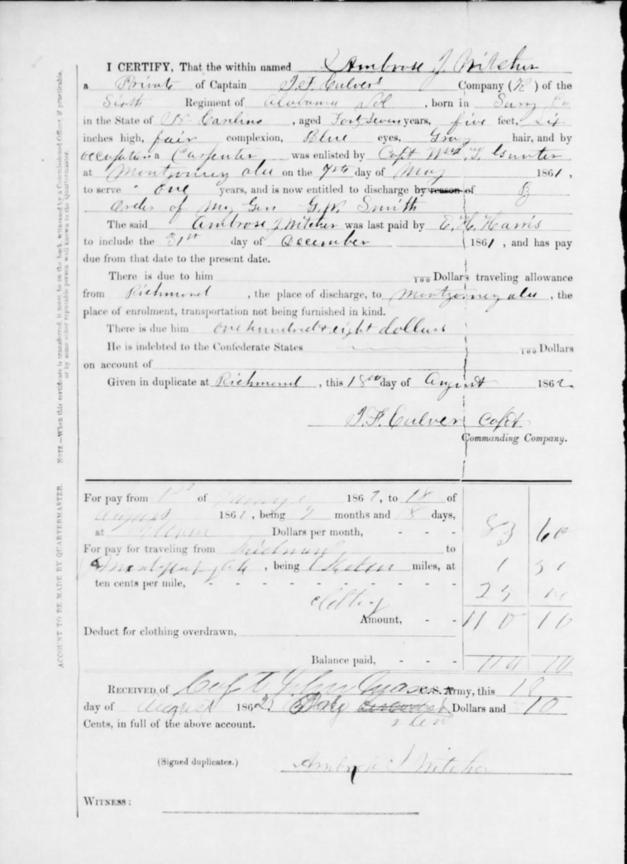 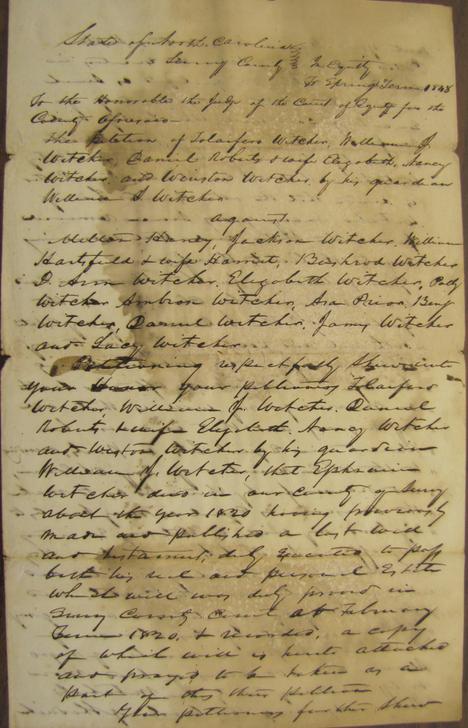 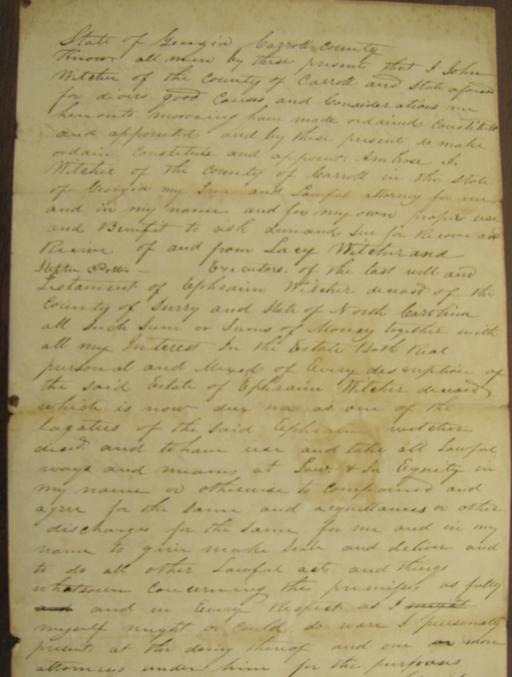 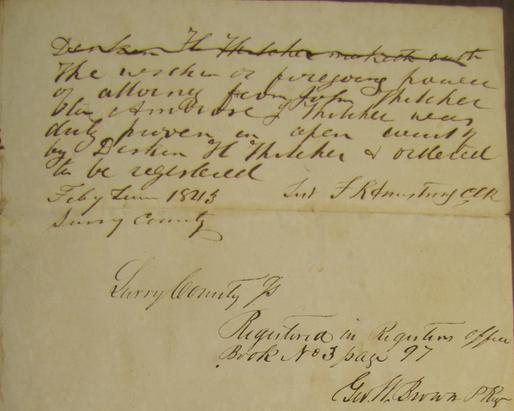 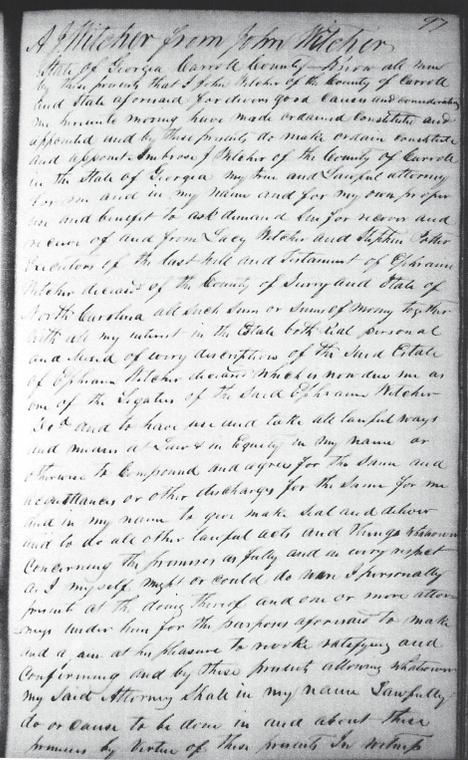 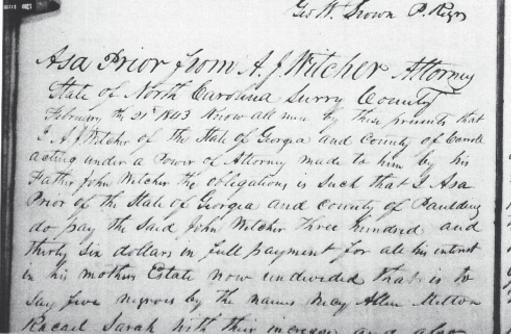 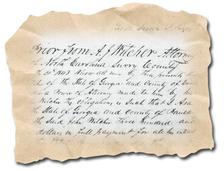 In the James Witcher Family bible (click here to see this record), one of the children of John and Polly Witcher is identified as AJ Witcher.

I feel sure that Susan AJ Witcher was named after AJ, who was her first cousin. Susan was the daughter of James and Tempy Witcher and is listed in the lineage of James and Tempy on the page opposite of John and Polly Witcher’s family record.

This same bible lists Bushrod W. Witcher as AJ’s brother. Bushrod was born on January 29th, 1819, a little over five years after AJ was born.

As I researched the lineage of John and Polly Witcher, I was intrigued by some conflicting records about AJ Witcher, and the fact that documentation of my research could provide important clues for others who are seeking to know who their ancestors were.

We know that John and Polly did have a son named AJ Witcher.

In 1843 John Witcher joined his siblings, as they together sued to obtain their part of their father Ephraim Witcher’s estate. This lengthy and divisive estate battle is discussed at length on this website and can be reviewed by clicking here.

Fortunately, the records from Ephraim Witcher’s estate provide invaluable clues as to who AJ Witcher was.

From a legal document dated the 12th day of January, 1843, we know that John Witcher had retained Ambrose J. Witcher as his attorney to sue for what was due him as a legatee of Ephraim Witcher’s estate. This power of attorney was proved in a Surry County, NC, court in February of 1843.

Ambrose J.Witcher’s power of attorney was proven before the North Carolina court by his cousin Diskin H. Witcher, a son of James and Tempy Witcher. Here is a transcribed record of that event. “The record of foregoing power of attorney from John Witcher by Ambrose J. Witcher was duly proven in open court by Diskin H. Witcher & ordered to be registered. Feb Term 1843 – Surry County”

This power of attorney by John Witcher was also recorded in deed book 3, pages 97-98, on January 12th, 1843, in Surry County, North Carolina. The document is headed with this description: “AJ Witcher from John Witcher.” The record then specifies AJ as being, “Ambrose, of the county of Carroll, in the state of Georgia.”

Finally, deed book 3, page 112-113, further defines who AJ Witcher is in relation to John Witcher. That record begins with “Asa Prior from AJ Witcher attorney.” Then the following is stated: “February the 21st 1843 know all men by these presents that AJ Witcher of the state of Georgia and county of Carroll acting under a power of attorney made to him by his father John Witcher….”

John Witcher had died on Christmas day in 1847. This would explain why the children of John were listed in a Spring Term of 1848 court petition. In this petition, Ambrose Witcher is then listed as one of the legatees to Ephraim’s estate.

As we can now see, the name AJ and Ambrose J. were definitely interchangeably used to describe the son of John Witcher.

What’s not so clear is what became of AJ, who also went by the more official name Ambrose J. Witcher.

We do know that on September 13th, 1840, in Carroll County, Georgia, AJ Witcher married Mary Burns. I can only assume that this particular AJ was the AJ associated three years later (in 1843) with the Ephraim Witcher estate battle, then identified as both AJ and Ambrose J. Witcher.

I have not found a federal census record which fits the identity markers for either this particular AJ or Ambrose.

However, in the Alabama state and federal census for the year 1850, a certain Andrew J. Witcher appears in the records. We know both censuses lists the same individual, as the neighbors are the same in each census record.

The date and place of birth given in the federal census record matches that of Ambrose J. Witcher, who we know was born in November of 1814, apparently in North Carolina. This 1850 federal census further reveals Andrew J. Witcher was living in Coosa County, Alabama, with a woman named Mary Witcher, and four children, Vincent, Bushrod, Elizabeth, and Benjamin.

Could Andrew J. Witcher be the same individual who just two years earlier, in 1848, was listed in an Ephraim Witcher estate record as “Ambrose?” I think he is.

To further mystify this question, records indicate that a certain Ambrose J. Witcher and a Vincent T. Witcher were mustered into Company K, 6th Alabama Regiment, on May 16, 1861, in Montgomery, Alabama. In those records the names Ambrose and AJ are interchangeably used to describe the same person.

It should be recalled and remembered that the 1850 federal census reveals that an Andrew J. Witcher had a certain child named Vincent who was living with him at the time, presumably his son. That census indicates that Vincent was born around 1842, making him around nineteen years of age when the Civil War began.

Sadly, Vincent T. Witcher, of Alabama’s 6th regiment, was killed at Chancellorsville on May 2, 1863. At this point, I will quote out of Charles Witcher’s excellent book called, “The Georgia Witchers.”

“On August 15, 1863, Ambrose J. Witcher filed a claim for settlement on the death of that same Vincent T. Witcher, such claim being the mechanism through which legal heirs sought to recover any pay due the deceased soldiers to whom they were heirs.

Anyway, the wartime medical records of Private Ambrose J. Witcher revealed that he had blue eyes and grey hair, was of fair complexion, was five feet, six inches in height, and was a carpenter by occupation when he enlisted in 1861. He was discharged August 18, 1862, having served a year of service, and was paid for transportation back to Montgomery.”

All evidence certainly indicates that the “Andrew J. Witcher” of the 1850 census is the same Ambrose J. Witcher, who was the father and rightful heir of his deceased son Vincent’s military pay. It should be recalled again that Vincent was listed in the 1850 census, presumably as a child of one “Andrew J Witcher.” This military record indicates that Andrew and Ambrose are one and the same persons.

I cannot explain the disparity between the names Andrew and Ambrose. In fact, it is inexplicable.

Maybe he went by both names, Ambrose and Andrew, but I doubt it. Census takers were not always spot-on in their record keeping duties. Perhaps misinformation was given by a child, an acquaintance, or farmhand, while AJ was in the fields or away on business. This has been known to happen. Any input on this matter would be greatly appreciated and any needed corrections will be made.

As I have noted, curiously, I’ve not been able to locate, before or after the 1850 census, the name Andrew J. Witcher, at least nothing that matches the needed criteria, such as date and place of birth.

However, there was another Andrew J. Witcher listed in the 1850 federal census. Amazingly, this Andrew J. Witcher was living in Paulding County, Georgia, and was listed as a male who was fifteen years of age, born in Alabama! He was living with Daniel Witcher, a thirty-six year old farmer from Tennessee. The parentage of this Andrew J. is unknown to me, but he is obviously not AJ, the son of John and Polly Witcher.

The offspring of the children of AJ Witcher and Mary Burns (their children apparently being Vincent, Bushrod, Elizabeth, and Benjamin) can apparently trace their rich heritage back through Captain John Witcher of Cedartown fame and his wife Polly Witcher; and I believe the ancestor Polly Witcher was the daughter of John Witcher Jr., son of Major William Witcher of Pittsylvania County, Virginia.

To read more about Ambrose’s brother Bushrod W. Witcher and his wife Susan AJ, click here, and scroll to the end of the page.

For your pleasure, I have provided a few images of the court records which I referenced to further your research. Wayne Witcher, a gg-nephew of Bushrod and Susan AJ Witcher.

Who Was AJ Witcher?