just ask to be friended

This is the 1763, Amelia County, Virginia, tithable tax record for William Wiley. Notice that Henry Witcher is no longer counted in this household. 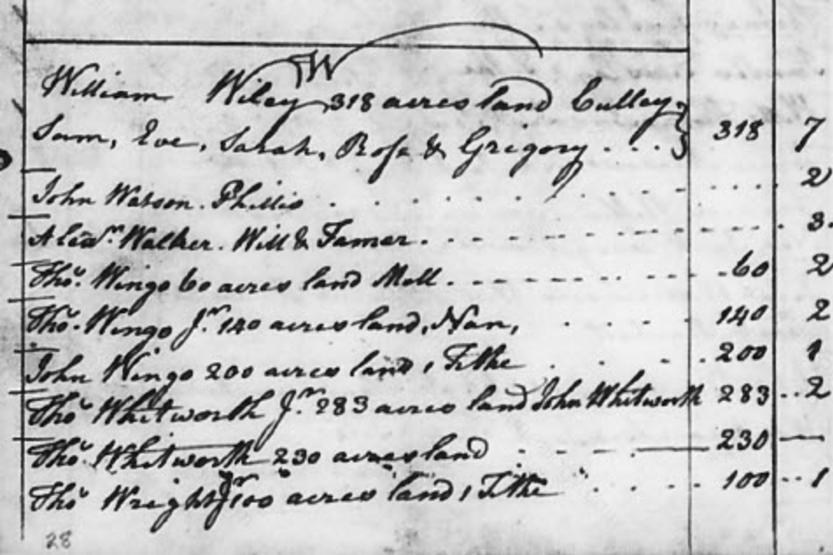 This is the 1762, Amelia County, Virginia, tithable tax record for Henry Witcher 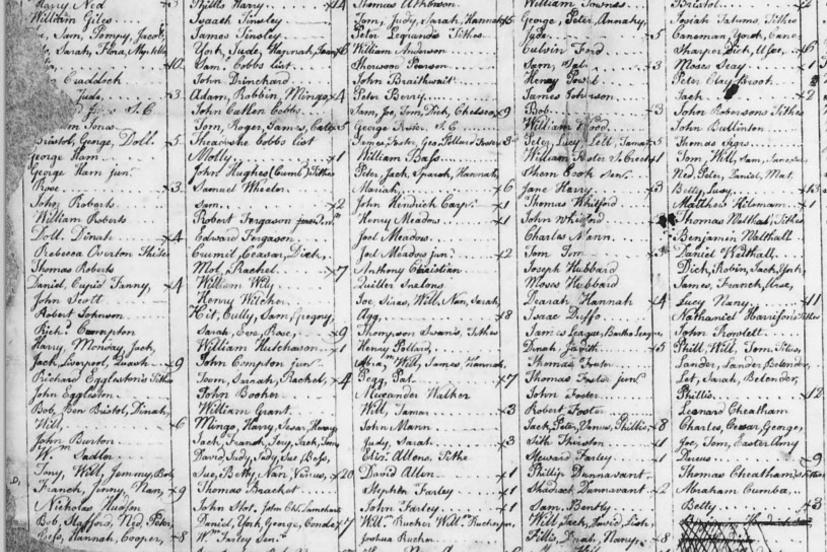 Witcher family researchers have heard a version of the common story that all Witchers descend from one ancestor, Major William Witcher of Pittsylvania County, Virginia. One adaptation of the story says that two original Witcher immigrants came over from England, a much younger William Witcher who sailed top-deck, while his twin brother stowed away in the belly of the ship.

However, after sifting through forgotten colonial records, we now have reason to doubt these often rehearsed family stories about the original Witcher immigrant to America.

We now know that obvious, and perhaps on purpose, mistakes have been made in the transcription of Major William Witcher’s will. This, plus the recent discovery of two previously unknown colonial era Witchers named Henry and Edward, has caused me to believe that Major William Witcher was not the original Witcher immigrant to the American colonies.

Let me first begin with the will of Major William Witcher.

For reasons which seem obvious to me, someone has inaccurately transcribed William’s will, placing this information on the internet, and giving the fictitious indication that the sons in that will were not called juniors. As evidence, I have provided a sample from FamilySearch.com of one inaccurate copy of William Witcher’s will.

At the bottom of this page, I have provided an image of the actual court record of Major William Witcher’s will. After reading the official document, what will be blaringly obvious in the above transcription is the omission of the letters “jr” after the names, John, Daniel, Ephraim, and James, the letters “jr” of course shorthand for junior. In fact, the omissions are so obvious that we can only conclude that those titles were purposely omitted. Unfortunately, this inaccurate presentation on the part of some transcribers has deceived and confused many Witcher family researchers.

It’s best to review an image of the official document being generalized by a transcriber. Though it’s rare, sometimes omissions are on purpose, in order to advance an individual researcher’s agenda.

However, more often than not, honest mistakes are made because of problems translating heavy, cursive handwriting. Plus, almost always, to save time and space, transcribers will truncate (shorten) these old documents, especially in publications which feature an entire codex. In so doing, the essence of what was being communicated in the document may very well be missed by the serious family researcher. This is why it’s so critical to review the actual document.

By looking at the original will of Major William Witcher, we can know for certain that there were other Witchers in the area of Pittsylvania County, Virginia, who were not descended from Major William Witcher. It’s obvious that, for every man named junior in Major William’s will, there had to have been a senior in that local area, and logically those titled senior were not the sons of William.

Using this fundamental argument, referring to the will, we can be assured that there were at least four other Witcher men in the area who had not issued from Major William Witcher. Those men were Ephraim, John, James, and Daniel Witcher.

To this date, the earliest record I have seen of any Witcher in America is that of a certain Henry Witcher, who came to the American colonies in 1642. He was an indentured servant, who received passage to the colonies on the ship of Captain Samuell Mathewes.

The records then resume over a hundred years later, in 1758, in a land transaction in Halifax County, Virginia. The deed is dated July 20, 1758, and defines William Witcher as a planter who had purchased 100 acres and buildings from William Adkinson. Keep in mind that this transaction is fifty years before Major William Witcher died, which can cause us to question if the William who purchased this land in 1758 is the same man who would be later known as Major William Witcher. I believe they are one and the same person, but we should accept the possibility that they may not be.

Many original American pioneers, including Witchers, have lived and died, their lives never being illustrated in early colonial records, especially those who were unmarried frontiersmen, subtenants, or worked as sharecroppers, etc. Sadly, where transactions were recorded, many of those early records have been lost to war, fires, or neglect.

Of the records which do remain, most surviving pre-1800 wills, marriage bonds, tax records, and deeds have been transcribed and published. However, open court books for this period are often unpublished and offer a wealth of new information. I expect these particular records are unpublished due to the high volume of redundant trivia they contain, which hinders the efficient transcription of these largely overlooked codices. Perhaps people just don’t know how valuable they are.

In the earliest open court records for Pittsylvania County, I have discovered several Witcher names forgotten to history. One of particular interest is a certain Edward Witcher.

In Pittsylvania County’s open court, book 4, on page 85, dated May 28, 1778, a simple entry is made for Edward Witcher which exempts him from the payment of levies. Generally speaking, these types of exemptions are made, “Such only, as the county court, and vestry, for reasons, in charity, made appear to them, shall think fit to excuse.”  This permitted the county courts to exempt whomever it wished from the public tax, including the very elderly, and allowed the vestry to independently exempt persons from the parish tax.  It is likely that court exemptions were mainly for the aged and infirmed. Basically, exemptions were for those who were unable to support themselves.

Unfortunately, the one line entry in 1778 for Edward Witcher fails to reflect what case was made to exempt him from paying taxes. The record simply states that he was exempted from levies. I feel certain he was not exempted for purposes of ministry. This then requires us to ponder whether Edward was disabled or very aged.

If Edward Witcher was exempted from paying taxes due to his age, this could indicate he was born around 1713, if one concludes that 65 years of age would qualify an individual as too elderly to work. Of course this line of reasoning requires us to consider Edward Witcher as the possible father of Major William Witcher and-or the seniors, John, James, Ephraim, and Daniel. However, more documentation will be needed before we can conclude with any level of certainty these types of speculations, as Edward Witcher may have been exempted simply due to a physical handicap. However, it should be noted that Edward Witcher is not listed as a son in any Witcher will for that time-period.

Also of interest is another fascinating, recent discovery in the 1762 Amelia County, Virginia, tax records for a certain Henry Witcher.

Amelia County was created in 1735 from parts of Prince George and Brunswick counties, and is to the north-east of Pittsylvania County, not far from the tidewater region of Virginia. The presence of a Witcher in this Amelia County tax record is extraordinary, as it represents the first evidence of any pre-1770 Witcher outside the Halifax/Pittsylvania county region, excepting of course the first Henry Witcher who landed in 1642.

Nothing is known of the Henry Witcher found in Amelia County, other than one very clear record found in the 1762 Amelia County Tax records. In this record, Henry Witcher is taxed in the household of William Wiley. Henry is listed below William Wiley and above six slaves named, Kit, Cully, Sam, Gregory, Sarah, Eve, and Rose. I expect that Henry Witcher was employed as an overseer on Wiley’s 318 acre plantation.

Henry Witcher is not listed in the 1763 Amelia County tax record, leaving us to contemplate who he was and where he disappeared to. I have included images of these records at the bottom of this webpage. There is no record of Henry Witcher in Amelia County deed books. We may never know who this man was, but finding this one record is a breakthrough, as it does present tantalizing clues in our search for the original Witcher patriarch.

Since we can conclude that Henry Witcher of Amelia County was not a son of Major William Witcher, was he then William’s father? At first glance, I have my doubts.

Could it be that William Witcher was the first from a small family of Witchers to migrate east from the Virginia tidewater region, eventually settling in Halifax County, other Witcher family members soon following?

Perhaps the Amelia County tax record of Henry Witcher snapshotted a moment in the quiet, westward migration of a not-yet-established Witcher clan. Perhaps Henry Witcher left Amelia County in 1763, to follow his family to Halifax County, where he died, leaving no record of his residence there. These are quite possible scenarios.

At any rate, available records now validate the lives of at least five Witcher men who preceded the birth of Major William Witcher’s sons. Those men are John, James, Daniel, Ephraim, and now we are introduced to a certain Henry Witcher of Amelia County, Virginia. Actually, there could have been at least six men who were contemporaries of Major William Witcher, if one includes Edward Witcher. Including Major William, perhaps all seven men were brothers, sons of the one original immigrant our ancestral memory seems to so vaguely recall.

Taken as a whole, the evidence overwhelmingly proves that Major William Witcher could not possibly be the original patriarch of the earliest colonial Witchers. I believe the life-story of our original English, Witcher ancestor, repeated over many generations, has understandably been confused with that of Major William Witcher.

I expect that whoever the original Witcher patriarch was, time may have eroded any evidence of that first family, and we may well have to settle with the knowledge that, however insignificant our beginning may have been, our Witcher roots have most definitely contributed significantly to the establishment and growth of our great nation.

Images are at the bottom of this page. Some browsers may place those images quite a bit down, so just scroll the page to find them.

Who was the original Witcher patriarch?